Parents FURIOUS, LOOK at What Was Discovered

Parents were furious about a question that a Northern California progressive teacher put on a test, and it wasn’t just the folks in California, either. The question was equally offensive to members of the KKK, viewers of Fox News, Texans and Floridians.

Parents of students attending Whitney High School in Rocklin, California are perturbed over a quiz question. A screenshot of the offensive interrogatory, which was part of social science quiz, was exposed and went totally viral. The social-science experiment produced explosive results and everyone hit the ceiling.

Students were asked “to choose between four options that match the definition of ‘a group of complete idiots.’ The choices are the Ku Klux Klan, Florida, Fox News and Texans.” You had to pick one and only one, and the answer was worth 1 point.

Everyone assumes the smart a$$ teacher was planning on passing out a free point but the liberal propaganda that goes with it is what infuriated everyone in three states, along with Faux News viewers coast-to-coast.

Orlando Weekly snarks, “presumably, this question was a freebie with any answer counting as correct. If not, the anger might be one of the funnier examples in recent memory of hit dogs hollering.” Parents are certainly howling now.

A teacher at Whitney High School in CA put this question on a quiz: pic.twitter.com/OLCTfvb1Ze

The phone on the desk of Whitney Principal Justin Cutts melted after the “screenshot spread quickly on social media.”

It forced him to face the TV cameras, hat in hand, begging parents for forgiveness. He “confirmed that the screenshot was legitimate” and promised “appropriate disciplinary steps” would follow.

Whitney High welcomes everyone, even students originally from Florida or Texas, the ones who’s living room TV is tuned to Fox, and the ones with Klan sheets in the closet, Principal Cutts insists. His school “is committed to providing each student, family and staff with a safe and welcoming environment.”

They have Play-Doh and everything. Parents don’t need to yank their kids from the classroom, he begs.

A message to the Whitney High School community: pic.twitter.com/oJWcFFN522

After all, how can they give sanctuary to illegal immigrants from all over the world and then discriminate against Texans? They won’t be able to do that until Democrats prove they can hold on to the Imperial Palace in 2024.

The vaccism is on open display. Parents were never supposed to even learn about that quiz question. It was simply supposed to be one of those buried little propaganda talking points to reinforce the overall Socialist lesson plans.

These parents who dared to question the happenings in their children’s classroom will now be added to the domestic terror watchlist. That’s not wasted on Orlando Weekly. The bulk of the offensive question was centered around three “hotbeds of COVID-19 denialism.”

Places where they insist on things like science to back up the opinions, not politics. The only problem is we can’t trust the science because the teachers don’t teach anything but liberal nonsense.

On the first of June, Congresswoman Lauren Boebert (R-CO) broke much needed ground in Congress… again. Boebert is…
byMatthew Holloway 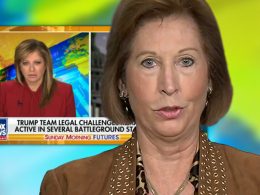