A left leaning liberal teacher in Gig Harbor, Washington, went spastic and started spewing progressive filth at one of his Kopachuck Middle School students. He didn’t realize he was being secretly recorded on video.

When a conservative 8th grade student was asked to stay after class to talk about his essay assignment, he cunningly rigged an undercover camera to record the encounter. He had a feeling that the teacher didn’t like his choice of a hero, President Donald Trump. The class of mostly 13-year-old students in Washington state learned when you get an essay assignment to write about your hero, it better be one the faculty approves of.

The video runs for nearly 10 minutes and was shared with a local radio station host, Jason Rantz. The teacher’s liberal bias is clearly on display as Connor Seaman unsuccessfully tries to intimidate his impressionable student into agreeing that the President’s immigration policy is misdirected and that President Donald Trump is a racist.

The assignment was name their hero and provide sources to explain the choice. After outraged parents had the district’s phone ringing off the hook, the district tried to justify the statements of their employee. “The comment that the teacher tried to convince the student he was wrong for supporting President Trump’s immigration policy is not accurate,” they claim. They insist it was “about immigration policy in the context of providing evidence for why President Trump is a hero.” They go on to add Seaman’s “intent was to encourage the student to use more than one source for his assignment.” If that was his intent, he clearly didn’t communicate it very well.

White House not an acceptable source

The reason the unnamed student chose President Trump to write about was “partially because of his immigration policies and push to build a border wall.” The teacher, Connor Seaman opened the discussion harmlessly enough, “Let me pull up your project and see how you did.” Once the assignment was loaded in he asked, “What sources are you using?” That’s a valid question. The student explains “he sourced the White House for facts on building a border wall, citing WhiteHouse.gov,” the radio station relates.

If the District was correct, then what the teacher should have asked next was, “what other sources did you use?” Instead he implies that the source the student did use wasn’t good enough. “So, it’s the president’s website that’s saying it? You might want to try some different sources.” If he would have left it at try some different sources, that would have been appropriate, but the instructor had to pass judgment as well.

ILLEGAL IMMIGRATION is comparable to "JAYWALKING."

The student acknowledged that more sources would be appropriate but defended the one he had. “He’s telling the truth though.” That’s when Seaman went ballistic. He immediately launched an emotional tirade against the administration’s immigration policy. The English teacher or, as they call them now, Language Arts instructor, can’t even speak grammatical English. “We kind of talked about the wall thing so, like, I mostly know about this because of my own research. There’s only, like, along the wall that’s been built has mostly just been replacing old wall that was already there. I mean, it wasn’t really a wall. It was kind of like a fence. You know? But, it’s still a barrier. The promise was to make a wall along the border and only, like, 100 miles, I think is the number out of the 3,000 total miles has actual structures.”

Why is it heroic?

That’s when it got political. “Why is it heroic to make a wall to keep out immigrants?” Suddenly, a 13-year-old has to defend himself in a logical argument with an adult. The teacher goes on, “So, like, for example, like, let’s say, because jaywalking is illegal, let’s say I were to do a taskforce that cost billions of dollars to stop jaywalking once and for all type thing. Is that, like, you see the kind of point I’m trying to get right here?” The point is he loves illegal aliens.

“I don’t know if you know this but, actually, immigrants who cross illegally, they perform crimes at a lower rate than U.S. citizens do.” The eighth grader made the teacher’s head explode when he calmly replied, “not true.” Seaman fought back angrily, “If you are going to introduce bullet points, you kind of have to back up with why that’s heroic, because there’s a lot of people who would argue that it’s not heroic and it’s actually, a lot of the rhetoric that has been said has been very racist.” So now the boy’s hero is a racist too.

At least five people were killed, and forty were injured, during an attack on a Christmas parade in…
byAnastasia Boushee

In the Biden-Harris regime, Antifa are emboldened, no longer are they limited to black bloc tactics in the…
byMatthew Holloway 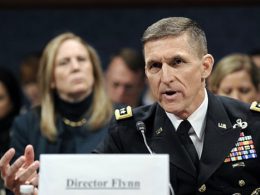