During the onset of renewed hostilities initiated by the islamist terrorists of Hamas and the Islamic Jihad against Israel the increase in antisemitic and anti-white hatred became so profound, so endemic, so undeniable and rapidly spreading that even PBS Newshour has been forced to acknowledge it. Even more concerningly, since the recent cease-fire agreement between the Netanyahu administration and Hamas leaders, the hatred and attacks have only increased.

According to Jonathan Greenblatt, CEO of the Anti-Defamation league,

“The span of these attacks, they spread like wildfire across the country. You mentioned a few, California, Arizona, Wisconsin, Illinois, Michigan, New York, New Jersey, South Carolina, Florida, acts of harassment and vandalism and violence.

So, number one, the span is much greater than what we have seen, but secondly the tone, the brazenness, the audacity of these assaults in broad daylight. We have seen people basically say, if you are wearing a Jewish star, you must be a Zionist and you should be killed.”

Greenblatt went on to give several examples of recent violent outbursts that have shocked the public. He cited,

“people driving cars or marauding through Jewish neighborhoods and yelling, “We’re going to rape your women,” right, or yelling things like “Allahu akbar,” and literally then wreaking physical violence on people.”

On May 22nd, New York City’s prominent Jewish population was wracked with everything from the firebombing of Jewish businesses with improvised explosive devices in the 47th Avenue Diamond District, skirmishes and brawls breaking out between pro-Palestine and pro-Israel demonstrators.

The Woke Connection — Hatred of Whites and Jews: It’s Spreading

Even The Wall Street Journal has taken up the call, that the leftist predilection toward pidgeon-holing everyone and everything into their dialectic is the fatal flaw. Gerard Baker wrote, in “The Rise of Woke Anti-Semitism”

“The wider political and cultural environment is what makes this outbreak of anti-Semitism especially unsettling. For many progressives, this latest conflict in the Middle East fits—or rather, has been made to fit—the binary classification of the human race into oppressor and victim on the basis of identity that they now see as the defining dialectic of history everywhere.”

Baker continued, “It takes extraordinary intellectual flexibility to represent the Jewish people, especially those in Israel, as part of some grand global historical pattern of white-supremacist aggression, but these ascendant protagonists of modern progressivism are used to such gymnastics. As long as the narrative can be sculpted to fit the larger objective, it will do.”

He calls it “intellectual flexibility” what it really is, is blatant double-think. The ability to not only say that 2+2=5 but as so many on the left have demonstrated a unique propensity for: to force themselves to believe it while simultaneously knowing that it isn’t true. We find it in nearly every face of modern day “woke-ism” from critical-race theory to the concept of gender as anything other than a binary biological truth. But this is the dichotomy of today, we truly do exist in two overlapping universes, sharing only a physical time and place, but not reality or truth.

After being involved in a serious car crash and being severely injured, a young boy came back from…
byAnastasia Boushee 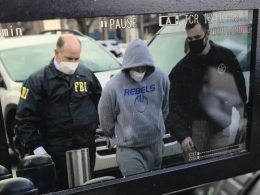 Ken Kohl of the U.S. Attorney’s Office confirmed during a national press call that a GOP Representative has…
byAnastasia Boushee