An internal whistleblower has revealed stunning images from a LinkedIn Learning allegedly being presented by the Coca Cola Corporation to it’s employees that is highly discriminatory against White People. This “training” is titled “Confronting Racism. Understanding what it means to be white. Challenging what it means to be racist, with Robin Di Angelo” The presentation is disturbingly racist against White people on its’ face and clearly discriminatory language against Caucasians is pervasive throughout. This is the BLM, critical-race theory lobby at work in corporate America.

The depicted excerpts from the training read, “In the U.S. and other Western nations, white people are socialized to feel that they are inherently superior because they are white. Research shows that by age 3 to 4 children understand that it is better to be white.”

“To be less white is to:

The natural implication is that white people are: oppressive, arrogant, authoritarian, overly defensive, ignorant braggarts who don’t listen to or believe anyone, are apathetic and in lockstep with “White Solidarity” which would seem to be a softened term for “White Supremacy”.

And of course, the proverbial mic drop occurs at 6 minutes 15 seconds into the just under ten minute presentation. A white screen is adorned with a single, bold faced, large font statement in Red.

Try to be less white

🚨🚨🚨 BREAKING: Coca-Cola is forcing employees to complete online training telling them to "try to be less white."

These images are from an internal whistleblower: pic.twitter.com/gRi4N20esZ

Coca-Cola told the Washington Examiner in a statement:

“The video and images attributed to a Coca-Cola training program are not part of the company’s learning curriculum. Our Better Together global training is part of a learning plan to help build an inclusive workplace. It is comprised of a number of short vignettes, each a few minutes long. The training includes access to the LinkedIn Learning platform on a variety of topics, including on diversity, equity and inclusion. The video in question was accessible on the LinkedIn Learning platform but was not part of the company’s curriculum. We will continue to listen to our employees and refine our learning programs as appropriate.”

Coca Cola’s obvious deflection fell flat however, with Dr. Karlyn Borysenko, MBA, PhD,  an organizational psychologist, and recently emerging political commentator. Dr. Borysenko gained acclaim for an opinion piece she wrote for medium describing how she came to conservativism and left the Democratic party after 20 years.

For people asking to verify this, the course is publicly available on @LinkedIn: https://t.co/T2mmXTACeJ

You can see for yourself. The Coca-Cola icon is in the top right hand corner on some of the images because they're using LinkedIn content for their internal platform.

Dr. Boryshenko further revealed an employee facing email from the Coca Cola Company which described the course as being “required curriculum” due by April 9 and due from “global plant and warehouse employees  by May 7”. Karlyn tweeted an image of this email with the somewhat cheeky note: “Just leaving this here”

The existence of the this type of corporate training is disturbing in its’ own right and stands as evidence of truly INSTITUTIONAL RACISM against White People. That such “training” is MANDATORY TRAINING is even more alarming.

What we must wonder, would happen to an employee who refuses to complete this training? Or vociferously objected to it? The would doubtlessly be “cancelled” and unfortunately, your average line-worker at a Coca-Cola plant doesn’t have the type of support that recent Cancel-culture target Gina Carano has had. No, they would simply be quietly fired and ineligible for unemployment, because in most companies refusal to complete mandatory job training is a disqualifying event. So instead you snap a quick picture, and send it to a voice you trust, and pray that you aren’t found out.

LOOK at What is Being Done Under Biden’s Order

The U.S. Department of Housing and Urban Development (HUD) will now take part in voter registration efforts that…
byStaff Editor
No comments 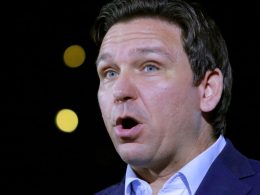 Ron DeSantis Just MADE HIS MOVE…

I read a report this week that took me by complete surprise. Ron DeSantis is going to hit…
byAnthony Smith
No comments