One child of a Hopewell, Virginia homeowner had been terrified by noises in the night. Soon after, a neighbor solved this mystery with a wild and bizarre discovery. Kasey Falls and her daughter seem to have had a total stranger living under their house. Police are still clueless.

Strange noises in the night

Kasey Falls and her family had noticed strange noises for two or three weeks but never imagined they had an uninvited house guest. The worst Kasey’s extended family feared was a raccoon, those things can be vicious.

It was an alert and vigilant neighbor who solved the mystery. She called local police but they dropped the ball, allowing their suspect to escape.

On November 5, a “neighbor driving by spotted a man crawling out of the crawl space under Kasey Falls’ home.” The neighbor told police, there “was a guy that came underneath of one of the houses, like in the crawl space. It just was really weird because he had a backpack and pillows. I don’t know if there’s someone living under this person’s house and they don’t know?”

That pretty much accounts for peculiar night noises. Some folks are wondering if it was Mike Lindell. After all, he has been having a rough time of it lately.

Ms. Falls’ home is occupied by her extended family which includes Kasey’s sister, her two children and her best friend. They were astounded when police knocked on their door to explain what caused the nightly noises.

“The police are showing up to my house, saying that someone drove by and saw a man get out of my crawl space with a pillow. It is scary that he was just living there, and I didn’t know.” Everyone knows that pillows are a sure symbol of deplorable hate, these days.

Once police explained what had been reported, things fell into place. Kasey told the cops he “may have been living under the house for two to three weeks.” It would explain “things like cigarette butts found on the property and some strange noises at night.”

Her 4-year-old is the one who woke up one night and ran to her bedroom in fear. She also noted that “It seemed like somebody was going through the cigarette butts and stuff like that.”

Despite the fact he was on foot and unaware he was being actively pursued by police, he managed to walk away like a ghost. “Police who responded to the 911 call never found a man with a backpack and pillows.” He vanished along with his noises. Hopewell isn’t culturally diverse enough to have a city-run homeless shelter.

If they catch up to the pillow carrying interloper, they’ll hand him over to Social Services. They work with Commonwealth Catholic Charities to help those in need, “sometimes placing them in hotels while working toward a more permanent solution.”

When another neighbor, Melissa Taylor was told to be alert for noises in the night, she “expressed both confusion and concern over the incident.” She’s freaking out and sent her husband to the store for more security cameras.

“It was a little startling, very scary. I monitor my Ring [cameras] that I have, actually re-located one of them. I’m getting another one soon.” Ms. Falls is willing to offer lenience. “As unnerving and scary as this whole situation has been, I do feel bad that he felt the need to sleep in my crawl space.” At least he was peaceful and, except for an occasional bump in the night, they never even knew a stray human was there. 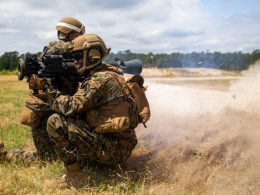 The United States Marine Corps. is about to celebrate Independence Day 2021 with a whole new set of…
byMatthew Holloway

Fox 5 reports that on January 11, three police officers were murdered, and a fourth was injured, during…
byAnastasia Boushee