Top Trump advisor Jason Miller appeared on Fox News to reveal the huge announcement Trump supporters have been waiting for. The internet is abuzz with conservatives showing excitement about the return of the former president, and the left and the media are furious.

According to Miller, Donald Trump will be returning to social media very soon, but not on any of the major platforms. The former president is planning to create his own platform that he believes will attract tens of millions of users.

”I do think we’re going to see President Trump returning to social media in probably about two or three months here with his own platform,” Miller said. “This is something that I think will be the hottest ticket in social media.”

“It’s going to completely redefine the game, and everybody is going to be waiting and watching to see what exactly President Trump does, but it will be his own platform,” he continued.

Unfortunately, Miller couldn’t provide further details about the new platform yet, but he mentioned that there have been “a lot of high-powered meetings” held at Trump’s Mar-a-Lago resort in Florida recently. Miller also noted that “numerous companies” are interested in assisting with the project.

Donald Trump has chosen to take the route bypassing all of the platforms that shut him out. Instead of begging for Facebook or Twitter to allow him back, he’s going to make his own platform. His supporters have wanted to hear from him, and soon they will be able to without fearing censorship. Trump is once again going up against the media establishment, Silicon Valley, and their allies in the Democrat Party. Will he succeed? Only time will tell. 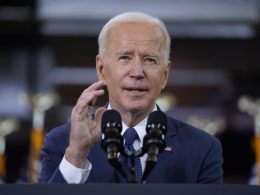 LOOK at What Biden Just Did!!!

What is a recession? Well, it has been defined as two consecutive quarters with negative economic growth for…
byStaff Editor
No comments