A County Attorney in upstate New York sounds the alarm on yet more voter fraud. According to Epoch Times and The New York Post, “Madison County Attorney Tina Wayland-Smith has said that election officials disqualified absentee ballots that were filed by three “deceased voters”

This is according to a filing with the New York State Supreme Court Justice Scott Del Conte. The race affected seems to be that between Democratic Congressman Anthony brindisi and his opponent Republican Claudia Tenney.

“This is a known problem of voting by mail. It should be investigated.”

A county attorney in #NewYork alleged there were #DeadVoters in a close congressional race that hasn’t yet been called, and a state #Elections official is seeking an investigation. https://t.co/b7xhUxqNuP

“This is a known problem of voting by mail. It should be investigated,”

“It is an election fraud. It’s a felony,” he told the reporters.

The NY Post also reported that “Tenney led by a hefty 27,000-vote margin in the machine count, but Brindisi nearly erased the entire lead during the counting of absentee ballots.”

If she is victorious Tenney would be the second US House seat flipped in New York State.

“Election results from the remaining counties in the district show Anthony Brindisi has now taken the lead,” Brindisi’s campaign said “We are hopeful that once New York’s 22nd congressional district is certified, Representative Brindisi will be sworn in again to continue his bipartisan work on behalf of this district.”

Voter Advocate Jarret Berg told Syracuse.com “Unfortunately, in New York there’s a stunning lack of transparency around just basic information when it comes to our elections,” referring to the Brindisi-Tenney House race.

In common refrain Tenney’s Campaign says ‘Its not over’

“Those ballots should not—and must not—be counted. The hearing in court has already established that the current tally includes invalid votes and that the process to review and count the massive amount of paper ballots is fractured,” Tenney spokesman Sean Kennedy wrote. “Today’s misleading and inaccurate tally is rife with errors and mistakes that must be rectified before this election is certified. It is far from final.” 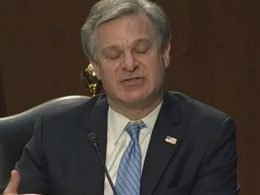 The alleged director of the FBI, Christopher Wray, is doing his best to avoid digging into “QAnon” and…
byMark Megahan
No comments

In the opening monologue of his Tuesday night program, Fox News’ Jesse Watters informed audiences about something really…
byStaff Writer
No comments

Get Ready for the Conservative Holocaust…This Was NEVER About Trump

After years of pretending to be conservative Republicans, a herd of RINOs are coming out of the closet.…
byMark Megahan
No comments