The second that mainstream social-media platforms led by Twitter and Facebook banned all of President Trump’s accounts in January, it became inevitable and today it’s one step closer. Not only was President Trump banned but thousands of users and content creators were banned or had their work removed for merely mentioning the President or playing audio or video of him. In response to this, President Trump has launched the platform “From The Desk Of Donald J. Trump“. This is seen as a first step to President Trump’s team developing a fully realized social media platform or “a place to speak freely and safely,”.

In a certainly coincidental development, Facebook’s meaningless “oversight board” upheld their decision to to “suspend indefinitely” President Trump’s accounts. A Twitter spokesman said that regardless of other platforms’ decisions Trump is permanently suspended from tweeting. Via the new platform the President responded:

“What Facebook, Twitter, and Google have done is a total disgrace and an embarrassment to our Country. Free Speech has been taken away from the President of the United States because the Radical Left Lunatics are afraid of the truth, but the truth will come out anyway, bigger and stronger than ever before. The People of our Country will not stand for it! These corrupt social media companies must pay a political price, and must never again be allowed to destroy and decimate our Electoral Process.”

The new platform reportedly evolved from a campaigning platform according to FoxNews,

“The technology appears to be powered by Campaign Nucleus— the ‘digital ecosystem made for efficiently managing political campaigns and organizations,’ created by his former campaign manager, Brad Parscale,”

Presently the platform allows Trump to post images, text and videos which visitors can then share to other social media platforms (so far as they will allow it). “This is just a one-way communication,” one source familiar with the platform said. “This system allows Trump to communicate with his followers.” As of now users cannot interact with the Presidents posts or create their own profiles within the platform which would complete the functionality of a fully realized social media platform.

Environmental extremist, special interests backed by a cadre of Democrat Governors will soon launch a more than $10…
byMatthew Holloway 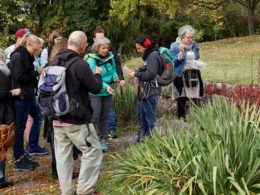 Mistaking THIS Plant is Landing People in the Hospital This Season

Before you make that salad, you better be sure exactly what every plant is that’s in it. Ignorant…
byMark Megahan

In the very definition of class and grace, First Lady of the United States of America Melania Trump…
byMatthew Holloway