Thief Tries Breaking Into Vehicle Of Military Veteran, Gets Whooped

There is no question that this thief picked the wrong man to rob, as this guy was a military veteran and an ex-police officer!

There was an armed burglar who was breaking into a man’s vehicle, but little did he know that the owner of said vehicle was a former police officer who had experience in special military operations. Needless to say, things didn’t go well for this person during his attempt to break into this law-abiding citizen’s truck.

Curtis Sprague described how he and his wife were awakened at about 4:40 a.m. on the 9th of January with their Ring Camera telling them that there was motion in their driveway.

Sprague told the local news that he immediately got out of bed after hearing the notification, throwing on some of his clothes and heading outside to see what had triggered the camera. He was also carrying a pistol for protection.

“[I] went outside to see what was going on and see if I could stop the problem,” Sprague told KOTV. “My initial intent was to go out, get the description, see if I could see a vehicle to give to the police.”

When he made it to his driveway, the first thing Sprague noticed was the dome light of his pickup truck being on. There was an eerie shadow moving around in the back of the vehicle, and that just happened to be where he kept a hatchet in the rear door.

The homeowner knew he would have to act fast if he was going to catch the intruder off guard.

“I’m starting out as an intended victim at a tactical disadvantage because he’s already acting, committing his crime, and I’ve got to play catchup and react to it,” Sprague said. “I know that I’ve got to change his school of thought and take him out of his plan and give him something he didn’t plan which causes a mental speedbump.”

That is why the homeowner decided to slam the door on the thief.

“That stunned him, judging by the look on his face when he did turn around and saw me standing there,” Sprague said when interviewed.

The former officer drew his own weapon and ordered the suspect to lay on the ground. After he complied, the homeowner seized the Glock 23 the suspect had tucked into his waistband.

Sprague is a man who has been around the block a time or two, and after he took the man’s identification out of his back pocket, he realized that one of the main reasons why the burglar had the gun was because he was “planning for contingencies.”

“He thought that there might be a chance that a homeowner would come out and confront him about the situation and his contingency was that Glock 23 on his hip,” he told KOTV.

Sprague noticed that another man was jumping out of a vehicle a few blocks down the street, so he yelled at him to stay away.

Mr. Sprague’s wife was watching the incident from an upstairs window, and she had already called the police.

Sprague said it was “very helpful” how she was not only watching from an upstairs window but also relaying information to the police.

Once the police sirens erupted, the suspects took off, according to Mr. Sprague.

The homeowner described the two suspects as tall and lanky and estimated them to be in their twenties.

Sprague also commended the Tulsa Police Department for the professional way that they handled the incident, calling their response time “excellent.”

Still, the military veteran was quick to point out that he merely “got lucky” in this incident and he doesn’t encourage others to react in the same manner that he did.

“There’s nothing in my vehicle that’s worth that guy losing his life over and there’s nothing in that vehicle worth losing my life over,” he told reporters. “I just kind of reverted back to some old training and some things happened and I got lucky.”

Police said that they are grateful that this incident was recorded on the ring camera because this is one of many burglaries that they have been investigating in Sprague’s neighborhood. These thieves definitely learned the hard way not to mess with a military veteran. 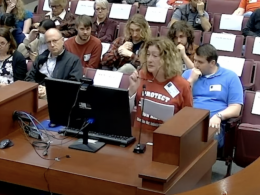 A Georgia school board chairman who silenced a parent’s protest against raunchy, inappropriate books was investigated in 2019…
byStaff Editor
No comments

Amidst the escalating tensions between Russia, Ukraine, The United States, and NATO, Kyiv and Washington, D.C. have both…
byStaff Writer
No comments