A Naples, Florida man put up an unofficial Donald Trump-Mike Pence presidential campaign sign in his yard, and was immediately attacked for it.

Wilton Wood, 43, served in the National Guard, and later was sent to Iraq as a private security contractor for the State Department. According to Wood, his duties at various points in his career included protecting Joe Biden, Hillary Clinton, and John McCain during their visits to Iraq as U.S. Senators.

Wood also said that until 9/11, the United States military fought wars to prevent the spread of communism, but then shifted its attention to fighting Islamic terrorism.

“Tens of thousands of Americans have died fighting communism,” Wood said, citing the Korean and Vietnam wars. “And then Sept. 11, 2001. Since then – it’s OK to be a communist. Tell me what the hell is going wrong with America. Have we forgotten?”

“Since I’ve been by there, I’ve had nothing but overwhelming support. Overwhelming. Incredible support for it. Everyone going by. Honking horns, taking pictures. I do not mean violence by any means with the sign. At all. It’s a statement nobody else had the balls to put it up. Despite what the sign says, I’m actually level-headed,” said Wood, who received the code enforcement warning at his home and the three sheriff office complaints.

Wood is concerned that Democrats will destroy the American government with socialism, which he believes will transform into Marxism and communism.

“You can’t put up all this information on a billboard. It’s a shock and awe kind of statement. But it makes you think, wait a minute,” Wood said.

According to Wood, the unique Trump sign cost him $750, and was put up on the evening of Friday, October 16. It is a large blue sign with a red line across it, but it does not have the typical “Make America Great Again” or “Keep America Great” slogan on it.

At the top of the sign, it reads: “LIBERALS ARE CRIMINALS – It’s Proven,” with “Trump Pence” in capital letters below it.

The bottom of the sign has four bullet points:

Wood said he contemplated adding another bullet point to the sign, which would have said: “Moron: I never said I was going to kill a Democrat.” But by the time he thought of it, the sign was already made.

“None of the calls resulted in a written report. The sign does not violate any state statutes,” said Karie Partington, media relations manager for the sheriff’s office.

The four foot tall, eight foot wide sign does not violate any state laws, but does violate Collier County codes:

“Signs erected within residentially zoned or used property shall not exceed four square feet in area and three feet in height, and shall be located on-site and no closer than five feet to any property line,” said section D of county ordinance 5.04.06. According to the code enforcement office, this ordinance has been in place since at least 2004. Fines for violating the ordinance can range up to $1,000 per day and up to $15,000 total, but are only issued as a last resort, the office said.

According to the code, a sign that size must be on commercial and not residential property.

“Well, I guess I have to take it down then. Just might take me a week and a half to get to it though,” Wood said. A week and a half would mean that the sign would be up until after Election Day.

According to its website, the Lakewood homeowner’s association has received multiple complaints in the form of calls and emails over language on the sign.

One of the many Democrat complaints came from Lakewood resident Phillip Russo, 63, who is originally from Ohio.

“I am a Democrat, OK. But I’m a firm believer that you should vote who you want to vote for. That’s what makes American [sic] great. The sign is offensive. It’s not a good look for our neighborhood. They’re reclassifying people now. ‘All Democrats are communist,’ or ‘they’re all liberal.’ This is crazy. I’m just afraid no matter what happens with the election, we’re going to have upheaval either way. Trouble with the Democrats with protests if Biden loses. If Trump loses, there could be riots. We’re just feeding the fire. History repeats itself, so here we go again,” Russo said.

Even some Republicans are denouncing Wood’s sign. Russell Tuff, chairman of the Collier County Republicans, made a statement about the sign.

“It’s definitely not the position that the Republican party has taken. It’s definitely not a statement that we endorse in any matter. We want a clean and safe election. From what I can tell for the most part, except for a few things here and there, things are going pretty well.” Tuff said about the sign’s messaging.

The world was rocked on September 14th as news broke of a new book, aptly named”Peril” being released…
byMatthew Holloway
No comments 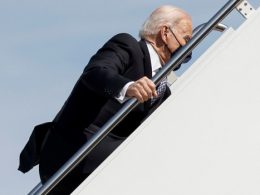 Biden Has Become a National Security Issue, It is High Time We Remove Him

Everybody laughs away those little “gaffes” Joe Biden always seems to be making. So what if he kept…
byMark Megahan
No comments