Congressman Tom Rice (R-SC) seemed like he was on the right track for quite some time, he was widely considered a “reliable conservative during his five terms in Congress” according to The Washington Post. It was with WaPo on June 13thd that he discussed what brought him to turn his back on his President, his Party, and his constituents. It quickly turned into an exercise in bashing patriots. It was a blindside. Rice had defended the President ardently in his first impeachment and even objected to the extremely irregular electoral results of 2020 after seeing the multiple and serious charges of electoral fraud. So what made him flip at the last minute?

In his interview with WaPo, Rice indicated that it was what he perceived as President Trump’s “inaction” on January 6th. WaPo wrote, ” After escaping the House floor and passing by bloodied and injured Capitol Police officers, Rice sought refuge in the office of Rep. Drew Ferguson (R-Ga.), where he watched hours of television. What he didn’t see that day amid the violence was any sight of Trump directing his supporters to stop their assault on the Capitol.”

For the record: DoD Cheif of Staff Kash Patel confirmed that the Trump administration was attempting to deploy the National Guard two days in advance of Jan. 6th but were blocked by Mayor Bowser of Washington, D.C., and the Capitol Police.

“For him to be calling Mike Pence a coward and him sitting at the White House surrounded by Secret Service and tweeting while Mike Pence is in the middle of all that, and he’s a coward? Give me a break,” Rice said at the event, according to The Post. 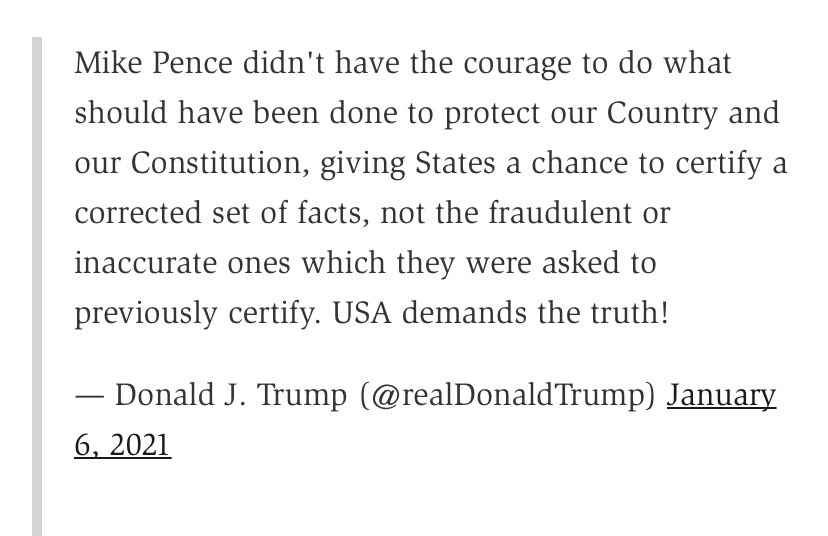 Rice bought into the narrative that Vice President Pence lacked the authority to reject ballots from states with electoral irregularities. Millions of Americans were outraged when Pence released a statement the morning of Jan. 6th rejecting his Constitutional authority and his legal responsibility to reject the corrupted electoral college certifications by leaning on a controversial 1876 interpretation that his role was “purely ministerial” made by Supreme Court Justice Joseph Bradley during another “corrupt bargain” that ended reconstruction and settled another disputed election through the appointment of an “Electoral Commission.”

Rep. Rice Bought Two Popular Lies: That Pence Was Powerless And That Trump Led The Riot

Pence clung to this absurd notion despite several respected constitutional scholars such as, Congressman Louie Gohmert (R-TX), Constitutional Attorney Ivan Raiklin, John Yoo, a law professor at UC Berkeley, and Robert J. Delahunty, a law professor at St. Thomas University all asserting that under the 12th Amendment to the US Constitution and multiple historic precedents: the power to accept or reject any states’ slate of electoral college votes is vested solely in the Vice President as reported by Right Wing News Hour.

The Second lie is baffling and cannot be chalked up to mere disagreement on surreptitious legal grounds. Rice said “If the president, by force, can intimidate Congress into voting their way, then we might as well do away with Congress and hand it over to a king,” Rice said. “What he did in my mind is what dictators do.”

It has been firmly established in the very impeachment that Rice turned against President Trump in, that the President in no recognizable form or by any logic that stands up “incited” the rioters, nor was the President slow or inadequate to address the riot taking place at the Congress.

The ultimate blame didn’t lay with President Trump, but with those people ultimately responsible for the Security of the Capitol grounds: Capitol Police Chief Steven Sund, Acting Chief Yogananda Pittman, Architect of the Capitol Brett Blanton, Senate Sergeant at Arms, and Doorkeeper Michael C. Stenger, Sergeant at Arms of the United States House of Representatives Paul D. Irving and ultimately: Speaker of the US House: Nancy Pelosi.

And the blame for the end of Congressman Rice’s career lies only with him. For turning his back on his people, his party, and his President. Indeed for failing to protect the Constitution himself, which he accuses President Trump of.

Apparently, Jeffrey Epstein made a sweetheart deal with Prince Andrew before he ‘offed himself’, and now there is…
byStaff Writer
No comments

Imperial Leader Joe Biden and Palace leadership were too busy dropping bombs on Syria, meant to kick off…
byMark Megahan
No comments