Lara Trump, Senior Advisor to the 2020 Trump campaign, host of The Right View and wife of Eric Trump has the GOP of North Carolina on pins and needles as she teases a possible run for the seat of retiring US Senator Richard Burr.

Most analysts agree that in light of overwhelming 2024 Presidential straw poll results at CPAC and the Iowa Caucus strawpoll, the Trump family is firmly in control of the Republican Party and any successful candidates this fall will need to at least align with the platform of, if not be explicitly endorsed by President Trump. And for those who secure the coveted nod of the Don’s approval, a successful primary is almost certain, and a powerful fundraising apparatus the Saving America PAC will support them.

Lara Could Have A Big Impact on a Crowded Field

Like her prominent Father-in-law, Lara Trump could strike the political scene like a meteor and sweep away the lesser candidates as in 2016 when there were no less than 17 potential GOP nominees for President.

“The biggest impact will be Lara Trump,” said Thomas Mills, Founder of PoliticsNC.com, speaking with The Hill. “She’s a Trump and that name carries quite a bit of weight in the GOP primary, but we don’t know how much.”

“She brings an unknown, but some real, star power,” Mills said. But, the career Democrat operative was quick to qualify his statement. “We’ve seen over the years a lot of people who begin campaigns with a lot of star power burn out really fast.” Considering the source, that sounds like wishful thinking.

Walker has stressed that he has the support of President Trump in the local press. “If I can quote this verbatim, I asked, ‘Mr. President, if we run for another position would you support us?’ ” Walker said to Raleigh News and Observer in 2019. “Anything,” President Trump said, according to Walker. However, there can be no doubt, if a Trump is on the ticket, the President will support them. What was Mills saying about “star power” again?

Military families are once again livid with the Biden-Harris regime today . This time, its about Afghanistan. First,…
byMatthew Holloway

Democrats are still losing their minds over the storming of the Capitol building on January 6, and are…
byAnastasia Boushee 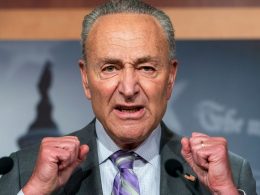