Even churches have fallen victim to the cancel culture. On Friday, Puyallup, Washington’s Motion Church canceled an event because the conservative speaker generated too many threats. Charlie Kirk, founder of Turning Point USA pushed back on the Antifa madness.

“An afternoon with Charlie Kirk” was scheduled for May 2 at the Motion Church’s Puyallup campus, south of Seattle but it was canceled due to “safety concerns in the wake of threats” against Kirk and the church.

Other local churches are chilled into compliance as well by the move. Kirk posted a response video Sunday. “I’m pretty upset. I’m not going to lie.”

Right wing conservatives aren’t welcome in liberal land, not even to talk in churches. “I was supposed to go to Seattle, Washington, to speak at a church, talk about the Bible, liberty, freedom, our nation.”

Washington Gov. Inslee on the so-called "autonomous zone" in Seattle:

"That's news to me".
pic.twitter.com/FYRcqCO4am

Those things are all forbidden in our post-Constitutional New World Order. “Antifa got word of this and Antifa threatened to create another CHAZ or CHOP.” He hardly imagined they would build an armed Antifa and BLM “autonomous zone” around him.

These are the same churches which “Antifa threatened to burn” when they destroyed people’s lives and terrorized communities. Unfortunately, “the event had to be canceled due to public safety concerns.”

He had a handy clip of Pastor Roger Archer’s video explaining why the event had to be canceled.

As Pastor Archer lamented, “they sprung with threatening declarations. They vowed to not only burn our properties to the ground, but also brought threats of physical violence against our church leadership, our neighbors, their properties, and basically wreak havoc in our committee.

This precious community that we love. I’m sitting here wondering what to do.” The churches didn’t ponder for long. Kirk isn’t coming to Seattle.

Meanwhile, the liberal Governor Jay Inslee pretends to ignore plans for civil unrest and insurrection. “That’s news to me,” he tweeted. Pastor Archer isn’t happy with Inslee. “Well, the recent history has taught us that there’s an apparent lack of interest at the state level of leadership to protect decent tax paying citizens.

Charlie Kirk responds after speaking engagement cancelled at Washington church due to threats by Antifa pic.twitter.com/vWjFBN8167

Those terrorists mobs know that there is no consequence for their lawlessness. They have nothing to lose and nothing to fear.” None of the area churches are willing to host any conservative for anything now.

For his part, Kirk understands that it’s not the fault of the churches or Pastor Archer. “He’s a good man. A lot of people are upset that the event got canceled, but you haven’t been in a situation like that.

When all of a sudden you might be held responsible for an entire community getting burned to the ground, I think in some ways, some things could have been handled a little bit differently. But Pastor Archer is a good man. And he was put in an impossible situation because our government would not protect its citizens.”

The Governors of Texas and Mississippi, Greg Abbott and Tate Reeves respectively brought a long overdue ending to…
byMatthew Holloway 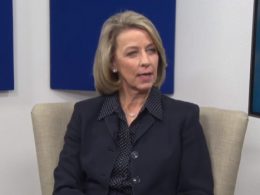 The Nevada Secretary of State, Republican Barbara Cegavske has drawn the stern rebuke from her own party and…
byMatthew Holloway

Unfortunately, New York City is becoming known for its attacks on Jewish people. From lockdown measures being unfairly…
byAnastasia Boushee