Animals always seem to know when a disaster is coming. In the Biden-Harris regime this week one of the furrier members of the Biden family took out his anxiety by attacking a Government employee. According to multiple sources, Joe Biden’s shelter-rescued German shepherd Major has bitten another government employee at the White House.

“A National Park Service employee was taken to the White House Medical Unit for treatment after the German Shepherd ‘nipped’ him while out for a walk.

This is the second time Major has had a biting incident with White House staff just three weeks ago which resulted in his being transferred back to the Biden family’s $1.2 million Wilmington, DE estate. Major was trained alongside the Biden’s elder dog the 14 year-old Champ. Since the two were trained they’ve both been allowed to run unleashed on the the White House grounds which has resulted in a few faux ‘paws’, in addition to the two bites.

“You turn a corner, and there’s two people you don’t know at all,” said Biden. “And [Major] moves to protect. But he’s a sweet dog. Eighty-five percent of the people there love him. He just — all he does is lick them and wag his tail. But … I realize some people, understandably, are afraid of dogs to begin with.”

Perhaps the Biden dogs are picking up on the extreme tension gripping the Executive mansion as its current occupants feel the rejection of 75 million people who seriously doubt the legitimacy of their administration. Animals pick up on all kinds of disasters in the making, maybe they know something we don’t.

Another report just a day later from the Daily Wire demonstrated the mainstream media’s infatuation with the Biden pooches, news broke that one of the dogs defecated on the White House floor outside of the Diplomatic Room.

One of Biden's dogs pooped on the floor, per pool

"Champ and Major were spotted in the hallway outside the Palm Room doors in front of the Diplomatic Room. There was dog poo on the floor. It’s unclear which dog was responsible for it"

The pups will be fine, the press is on their side. But just for a thought experiment let’s put the shoe on the other foot so to speak. With a different White House family.

What If It Was a Trump Family Puppy?

Without a doubt, if the Trump family hypothetically had a dog or two the headlines in a similar situation would read much, much differently. Following the bites, doubtlessly the press would insist on the dogs being leashed at minimum, if not barred from the grounds or possibly declared vicious and forced to wear muzzles. The likely headline from the pooping incident would probably read something like “Trump’s Racist Dogs Defecate on House Built By Slaves” 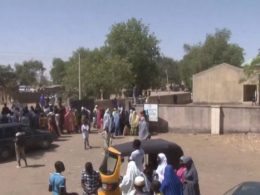 This is Zinnia Jones, aka Lauren McNamara formerly known as Zachary Antolak. “Zinnia, adult demon female” is a…
byMatthew Holloway