WOW: This is What Happens When a Supersonic Baseball (1,074MPH) Hits a Gallon of Mayo [VIDEO]

Now that we know a baseball can go supersonic, the next question is what happens when it hits something? Thanks to modern high speed camera technology and a custom built cannon, the team at Smarter Every Day answered it in stunningly spectacular fashion with a jar of heavy mayo. The jimmy sprinkles were a lot of fun too! Warning, do not watch this video unless you have time to watch it over and over again. You’ll find yourself missing phone calls and telling friends, family, and co-workers “hey get in here, you gotta see this!”

Destin Sandlin and his team at Smarter Every Day can’t stand to see really cool equipment sitting around and collecting dust. As part of one experiment to find out if a baseball can actually be accelerated beyond the speed of sound, they built a special cannon to find out.

Starting with “a large pressure chamber and vacuum chamber stuck together” the ball and a “plug” separate the two. “The barrel forms part of the vacuum chamber, and is sealed off at the muzzle end with plastic tape that ruptures when fired.”

“The firing mechanism runs the entire length of the pressure chamber, exiting out the back where it is held in place by a large pneumatic sear mechanism.”

A lot happens when you pull the trigger. “When the sear is released, it ‘pops the cork’ between the two chambers, sending high-pressure nitrogen into the vacuum chamber,” propelling the baseball forward at Mach 1+ velocity.

Even with a few bugs in the gear, it worked so well “they were able to shoot a baseball at Mach 1.38 (1,050 mph) on the very first try, with only a partially pressurized system and a leaking vacuum chamber.”

They couldn’t wait to find some cool targets. With suggestions from fans, they settled on things like a gallon bottle of jimmy sprinkles and a big gallon of extra-heavy mayonnaise.

To catch the action properly, they went out and rented some really expensive cameras. A lot of equally cool science leads up to the main events.

After vaporizing a jar of jimmies in truly spectacular fashion, they learned that some of the shock blasted confection remaining was quite tasty. The only thing better than filling a mayo jar with vanilla pudding and eating it straight from the jar with a spoon in the break room is blasting some with a supersonic baseball.

Starting at roughly the 18:25 mark, the baseball fired into the restaurant size plastic jug of mayo made one heck of a visual aid.

“The jar is vaporized in an instant from the sheer power of the collision, with the mayo becoming a potent-smelling aerosol in a flash.”

“There’s a flash of flame” as the baseball impacts the jar wall, “suggesting compression ignition happened at impact with the jar’s label. A shadow from the shockwave ahead of the ball can be seen in the video, and particles in the cloud of mayo can be seen changing direction as the trailing shock catches up.” 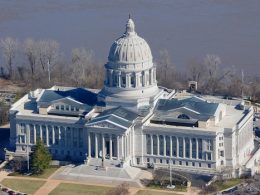 In the State of Washington, a non-profit organization which provides social services evicted a foster family in order…
byMatthew Holloway

NYPD Detective Anastasios Tsakos was laid to rest in Greenlawn, NY May 4th honored by hundreds of fellow…
byMatthew Holloway