Thanks to Imperial Leader Joseph Robinette Biden Jr., Washington D.C. looks more like the concrete block bunkers of a Communist regime every day as the fortifications and barricades are about to become permanent.

Fortifications for the elite

On Friday, the office of the Imperial Leader announced that the security fencing which barricades the U.S. Capitol into red and green zone fortifications will become permanent.

The security scramble has Americans alarmed the shocking new developments. The acting Chief of Capitol Police was selected to deliver the news. He declared that the elite powers that be are so terrified of nationalists that “vast improvements to the physical security infrastructure must be made.” That will “include permanent fencing.”

Last year, President Trump was forced to hunker in the bunker fortifications below the White House, while Antifa affiliated Black Lives Matter rioters peacefully looted and burned their way through the vicinity. Secret Service agents defended the perimeter but the president was mocked by the left.

Back then, nobody suggested that the existing fencing wasn’t good enough. Suddenly Democrats who live inside the beltway began to realize that the National Guard won’t be there forever. Well, at least not yet.

In another move toward castle like fortifications, the National Guard will protect the Imperial Palace at least until March.

Depending on how things go between now and then, they could be getting a permanent assignment and their own barracks so they don’t have to sleep in the halls.

The Mayor of Washington, D.C., Muriel Bowser yipped on Twitter that all the extra fencing is required for the “potentially volatile events” coming up. Events like the planned waste of Senate time with a hearing which will never result in impeachment conviction.

Bowser is terrified all the angry Trump Supporters will rampage. She needs fortifications. Big, strong ones. If she had her way, not only would they wall off the Capitol grounds where all the lawmakers work, but restrict access in the neighborhoods where they sleep. She also said last week that “these massive security additions would not be permanent.” She lied. That was last week.

What’s the #Simulation up to now in DC by the Supreme Court building? pic.twitter.com/pXhzthiSNy

Americans from every shade of the political rainbow are wondering, “what the heck is going on in Washington.” They want to know, one pundit writes, “why is the area protected by barbed wire fencing, National Guard troops, and police officers with riot shields.”

Washington, they can see, is locked down like a war zone. The way the fortifications are laid out for the impeachment is a big clue as to what’s to come.

Jason Rantz, a reporter for MyNorthwest, described what he saw as “a post-apocalyptic war zone, almost like a movie set. Only it was real, not fiction.” Fortifications included “non-scalable fencing delineating the Red Zone from the Green Zone.” Everywhere were “blockades of trucks and army vehicles blocking car traffic into neighborhoods.”

National Guard troops were spotted “patrolling security check points and standing guard at intersections.” He was clearly moved to report, “When all you see are armed National Guard and a few stray media members touring the zone, taking photos or video for broadcast, it makes everything feel ominous. Like something wasn’t right. Indeed, something wasn’t right: This isn’t what an American city should look or feel like.” 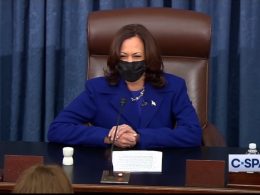 It seems that Kamala Harris, on her first-day assuming the role of Vice President of the United States…
byMatthew Holloway

Conservative News Sources Under Fire, This is Just the Beginning

Agents from the Federal Bureau of Investigation (FBI) have arrested Rachel Powell, a mother of eight, and are…
byAnastasia Boushee