All BLM ever needs to see is a police officer shooting a black man to protest.

They could care less if the man was committing a crime, calling it racist simply because it was a black man shot down.

This week was no different, as BLM took to the streets to protest over the death of Andrew Sundberg.

He Tried to Kill Me

Sundberg was shot and killed by a police sniper in Minneapolis.

This happened because he tried to kill Arabella Foss-Yarbrough, shooting at her in her home while she was cooking dinner for her children.

That mattered little to BLM, who started a protest in the streets.

This included the adoptive parents of Sundberg, who said their child did not deserve to be shot like an animal by a hunter.

Foss-Yarbrough disagreed, slamming protesters, asking them point blank if they would be protesting her death if Sundberg had been successful in his attempt to kill her…

To the parents, I would say to stop your child from acting like an animal so he does not have to be put down like one.

He had six hours, SIX HOURS, to negotiate with police before they took the shot.

I honestly have no idea how the attorney representing the Sundberg family can look at himself in the mirror.

If there was ever a case to justify taking someone out with a sniper shot, this was it… yet it would not be surprising if Sundberg becomes the latest thug to get christened as a national hero by BLM. 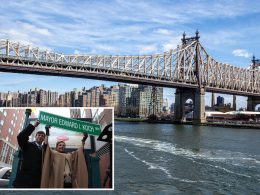 They Eat Their Own: Democrats Who Once Loved Him Are Cancelling Former Mayor

Behind the chocolate in every Cadbury Crème Egg prowls the shadow of kid labor, according to a brand-new…
byStaff Editor
No comments

The Utah Legislature voted Friday to override Republican Gov. Spencer Cox’s Tuesday veto of a bill that would…
byStaff Writer
No comments