Chelsea Wolfe, a 28-year-old BMX Freestyle athlete from Florida was announced on June 12th as an alternate for the USA Olympic team. In mainstream circles, the prevailing news narrative has been centered on the fact that Wolfe is transgender. This would likely have passed with little notice in a world where the transgender and LGBTQ narratives are becoming mundane. But there’s one problem: Wolfe should not be representing the American people on any world stage, let alone the Olympic podium.

The New York Post reported that Wolfe has a disturbing motive to get to that podium and a politically driven one at that. Peoples feelings about transgenderism notwithstanding, you cannot have someone with these goals represent America.

“My goal is to win the Olympics so I can burn a US flag on the podium,” Wolfe reportedly wrote on March 25, 2020, alongside an online article about how trans girls should be treated as biological males in school sports. “This is what they focus on during a pandemic. Hurting trans children.” 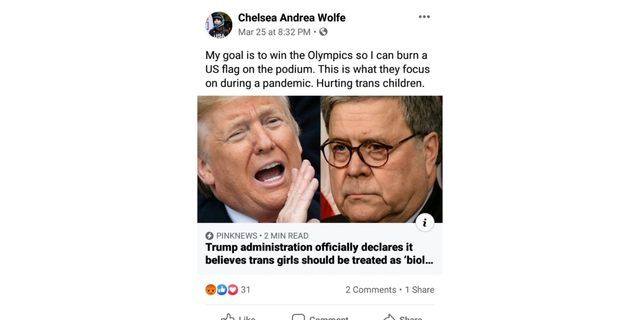 “This is what they focus on during a pandemic. Hurting trans children,” added Wolfe. The BMX rider also suggested in comments on the post that President Trump should have been assassinated.

“I would never say that someone should explode the head of the president. That would be illegal,” “But I will say ‘with dynamite.’ Because that’s just a sentence fragment and doesn’t actually mean anything. It’s not necessarily related to the sentence that came before it.”

Wolfe’s extremism is disturbing and inappropriate for an Olympian representing the United States, obtusely suggesting that the then-President of the United States should be executed in a graphic and grotesque fashion is not the image the American people would want to portray to the world.

According to Fox News, Wolfe responded to the torrent of concerns that followed Cheong’s report, about the now-deleted Facebook post.

“Anyone who thinks that I don’t care about the United States is sorely mistaken,” Wolfe told Fox News. “One of the reasons why I work so hard to represent the United States in international competition is to show the world that this country has morals and values, that it’s not all of the bad things that we’re known for. I take a stand against fascism because I care about this country and I’m not going to let it fall into the hands of fascists after so many people have fought and sacrificed to prevent fascism from taking hold abroad. As a citizen who wants to be proud of my home country, I’m sure as hell not going to let it take hold here.”

Like so many far-leftists Wolfe seems to have a severely flawed concept of fascism akin to that held by Antifa and Democrat-Socialists in Congress and has grossly mischaracterized conservatives and President Trump. Mussolini’s Fascism was by definition a collectivist, statist, far-leftist ideology that exalted the state above all else.

“The historian Robert Paxton offers the following definition in his 2004 book, The Anatomy of Fascism. “Fascism,” Paxton argues, is “a form of political behavior marked by obsessive preoccupation with community decline, humiliation, or victimhood.” These are familiar chords among today’s authoritarians, to be sure. But, Paxton adds, fascism also “abandons democratic liberties and pursues with redemptive violence and without ethical or legal restraints goals of internal cleansing and external expansion.”

Being mad about President Trump and other conservative’s views on transgenderism is one thing and everyone is entitled to their opinions, but perhaps Wolfe should leave the political science alone, stop threatening public officials, and disgracing the country that allows a transgender individual to live freely and compete. And with the games coming up, it wouldn’t hurt to work on that unturndown move, that’s supposed to be a tricky one.

During the opening statement of the Kyle Rittenhouse trial, the jury and the American people were shown extremely…
byMatthew Holloway

Jim Jordan is so confidant that he’ll be the next House Judiciary Committee chairman, he can taste it.…
byMark Megahan

After the extremely suspicious death of Antivirus founder, Entrepreneur, and Libertarian Presidential Candidate John McAfee, his widow is…
byMatthew Holloway