When Joe Biden said he wanted to ban all semi-automatic weapons, even Democrats started to distance themselves from him.

Jared Polis, the Democrat governor of Colorado and one of the most popular governors on the left side of the aisle, broke with Biden.

Colorado may be turning deep blue, but there are still a lot of gun owners in the state.

Point being, there was no way Polis would side with Biden on this one.

Biden had stated, “The idea we still allow semi-automatic weapons to be purchased is sick. Just sick.

“I’m going to try to get rid of assault weapons.”

When Polis was asked if he would support that position, he stated, “In Colorado, we have a magazine limit – 15 bullets, no more than 15 bullets in a magazine. So effectively, it reduces the ability of high-powered weapons to do harm.

“So look, I think all these things, including the red flag law, and expanding its use should really be looked at.

“Yes, that should be on the table to discuss thoughtfully, rationally. But we also need to talk about mental health.

“We need to talk about the divisive rhetoric that even some people who aspire to positions of leadership in our country unfortunately use almost every day.”

Wow… that is amazing.

That has to be a first. 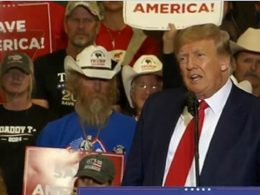 Check Out What Trump Just Dropped on Liz Cheney

President Donald Trump unloaded on Wyoming Rep. Liz Cheney and her family while speaking at a campaign rally…
byStaff Writer
No comments

Tucker Carlson Just Called Him Out!

Joe Biden finally got around to winning something. After dismissing monkeypox as nothing to really be overly worried…
byAnthony Smith
No comments

The people of New Hampshire, deep in heavily Democrat New England, in a swing state that flipped narrowly…
byStaff Writer
No comments