New York State Assemblyman N. Nick Perry has introduced a bill with chillingly authoritarian implications, which will be considered on Wednesday by the Health Committee. Assembly Bill 416, if passed, empowers the governor or whoever they designate,

“ORDER THE REMOVAL AND/OR DETENTION OF SUCH A PERSON OR OF A GROUP OF SUCH PERSONS BY ISSUING A SINGLE ORDER, IDENTIFYING SUCH PERSONS EITHER BY NAME OR BY A REASONABLY SPECIFIC DESCRIPTION OF THE INDIVIDUALS OR GROUP BEING DETAINED. SUCH PERSON OR GROUP OF PERSONS SHALL BE DETAINED IN A MEDICAL FACILITY OR OTHER APPRO PRIATE FACILITY OR PREMISES DESIGNATED BY THE GOVERNOR OR HIS OR HER DELEGEE AND COMPLYING WITH SUBDIVISION FIVE OF THIS SECTION.”

Even worse, for the government to detain you: you don’t even need to be infected with COVID or another communicable disease, all that is required is the SUSPICION that you are a “case, contact or carrier” and that you are SUSPECTED of being “a danger to public health”. The bill continues to describe that you could be detained for an indeterminate time at the discretion of the Governor!

A Glimpse of What This Bill Will Bring

Rebel News‘ Ezra Levant showed us exactly what this would look like this over the weekend when Canadian Police busted down a front-door “Gestapo Style” and arrested members a family of six having a meal together.

There were six people in a house in Gatineau, Canada. A neighbour snitched. Police went in, Gestapo style. Assaulting citizens.

So, yeah. Every lockdown politician who made this monstrous world and then tries to sneak away to Florida or Hawaii? Fuck you. pic.twitter.com/9IwcgAvqiJ

You’d Better Behave Yourself And Don’t Try to Leave or Else..

The deeper you read into this proposed legislation the worse it gets. According to the bill, “A person who is detained in a medical facility, or other appropriate facility or premises, SHALL NOT CONDUCT HIMSELF OR HERSELF IN A DISORDERLY MANNER, And SHALL NOT LEAVE OR ATTEMPT TO LEAVE such facility or premises until he or she is discharged pursuant to this section.” Based on the language of this bill: Are the other 70 genders off the hook?

Oh and it’s buried deep in this bill, but check out this grant of UNLIMITED POWER:

“THE GOVERNOROR HIS OR HER DELEGEE MAY, IN HIS OR HER DISCRETION, ISSUE AND SEEK ENFORCEMENT OF ANY OTHER ORDERS THAT HE OR SHE DETERMINES ARE NECESSARY OR APPROPRIATE TO PREVENT DISSEMINATION OR TRANSMISSION OF CONTAGIOUS DISEASES OR OTHER ILLNESSES THAT MAY POSE A THREAT TO THE PUBLIC HEALTH”

The Real Goal: Detain You And REQUIRE YOU to Complete “Treatment”

Here is the deep down crux of this piece of authoritarianism, at the Governor or their designee’s sole discretion the State would have the power,

“TO REQUIRE AN INDIVIDUAL WHO HAS BEEN EXPOSED TO OR INFECTED BY A CONTAGIOUS DISEASE TO COMPLETE AN APPROPRIATE, PRESCRIBED COURSE OF TREATMENT, PREVENTIVE MEDICATION OR VACCINATION, INCLUDING DIRECTLY OBSERVED THERAPY TO TREAT THE DISEASE AND FOLLOW INFECTION CONTROL PROVISIONS FOR THE DISEASE”

But Don’t Worry, If They Detain You: You Can Still “Request Release”

Defenders of this anti-Constitutional abomination will try to assuage your alarm by saying that if they detain you for a period “not exceeding three business days” that you’ll be “afforded an opportunity to be heard”. Furthermore, if you “request release” then the government has to get you a hearing “within three business days of such request” and that “after any such request for release, detention shall not continue more than five business days in the absence of a court order”.

So now assuming the judge agreed with you: you’ve been “detained” for eight days. How many days of Paid-time-off do you have? Did you get to make arrangements for your kids while they “detained” you? How many days of food does your family have? Does child-protective services had your kids?

How much did it cost to detain you and your family? Your job? Your home? Your Children?

Now imagine this: If the Judge agrees with the State: You could be detained for UP TO SIXTY DAYS.

New York Republican Congressional Candidate Liz Joy has it right, this is horrifying. And it has to be stopped.

This is straight up detention camp stuff in NY! A Bill giving @NYGovCuomo, Health Commissioner or any “designated” official full “power” to remove any person/group of people from their home if deemed contagious. It’s horrifying. Wake up NY & Fight! A416 https://t.co/mU2cWDm1oD 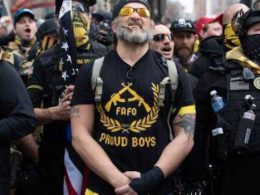 BLM Begins to Implode and Wither as Members Fight Over Money

And in the end, as they always do, the temporarily aligned “intersectional” forces of BLM, like Antifa: Eat…
byMatthew Holloway