As violence escalates between Israel and the Palestinians, Joe Biden is just going to make the problem worse, and Israel knows it.

Like most Democrats, rather than siding with the good guys, Joe Biden has decided to give aid to the people that keep their terrorists and missiles in hospitals and schools.

More Violence in the Middle East

The recent clash begun with Palestinian riots and attacks on security forces at the Temple Mount, and has continued with Israeli airstrikes on Gaza, which were retaliation for massive rocket attacks on southern Israel, including targets in Jerusalem. Hamas terrorists have fired over 250 rockets into Israel, while Israeli retaliation led to 140 targets being hit in Gaza, according to reporting by Haaretz.

Haartez’s report also notes that two Israelis were killed in a rocket attack on Ashkelon, while Israel has claimed to have killed the leader of the Palestinian Islamic Jihad rocket unit. Reports of deaths in Gaza have varied, but estimates say that at least 20 people were killed.

In a tweet, Republican Senator Ted Cruz pointed out why Israel has no interest in asking for help from Joe Biden. “The open hostility to Israel from across the Biden administration is as appalling as it is unfortunately typical of the progressive left that controls this administration,” Cruz wrote.

The open hostility to Israel from across the Biden administration is as appalling as it is unfortunately typical of the progressive left that controls this administration. https://t.co/i4vG3uCPtI

Ben-Shabbat said “international intervention is a reward to the Palestinian rioters and those who back them who were seeking international pressure on Israel,” Axios reported, citing “an Israeli official briefed on the call.”

He also stated that Israel will handle its affairs “from a position of sovereignty and responsibility regardless of Palestinian provocations,” according to Axios.

The anonymous Israeli official gave the international community some good advice that they likely won’t take: if they want to do something useful, “they should put pressure on the inciting elements on the Palestinian side.”

According to The Times of Israel, Ben-Shabbat also said that international interference would be “a prize for the rioters and those sending them who hoped to put pressure on Israel.”

For some unknown reason, perhaps just another part of the left’s obsession with race, Democrats and most of the international community continue to side with terrorists, while putting pressure on Israel to give in to their demands. No matter what Israel does, they are always portrayed as the bad guys. Just like the rest of the Middle East, the residents of so-called “Palestine” are never going to be appeased until the only Jewish state in the world is wiped off of the map. And Democrats like Joe Biden seem to be okay with that.

Even churches have fallen victim to the cancel culture. On Friday, Puyallup, Washington’s Motion Church canceled an event…
byMark Megahan 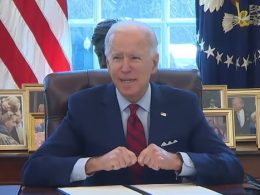