The severe cracks within the Biden-Harris regime are continuing to grow. The illegitimacy of the Democrat government becomes more and more apparent with each announcement as they continue to bow to the cancel-culture mob. This has never been more obvious than on Thursday when the face and indeed voice of the regime: Press Secretary Jen Psaki (known widely as ‘the Circle-Back girl’) announced she will be leaving her White House role.

On Thursday May 6th the announcement was released that Psaki will be leaving the White House with the typical milquetoast ‘I’m not actually telling anyone why I’m really leaving’ manner of justifications. Psaki’s non-answers have after all become legendary during her tenure. The Press Secretary has presided over a period of the most simpering, deferential and even protective treatment of an administration in American history.

“I think it’s going to be time for somebody else to have this job in a year from now or about a year from now,” Psaki said in an interview with CNN’s David Axelrod, her former colleague in the Obama administration, on Thursday.

The lengths that the mainstream media and Psaki’s office have gone to, in order to mutually guard Biden and Harris is an affront to the very concept of journalism. Psaki’s continuous mal-treatment of outlets like Fox and Newsmax are merely symptoms of this. It is unknown at this time who will inherit ‘the house that Psaki built’, her ‘softball field of nightmares’. But there are clues to be found as to what is very  likely the REAL cause of her departure.

Many who watch the Biden-Harris regime closely suggest that Psaki will likely be replaced with an “LGBTQ+ Person”. The idea behind this stems from a scandal that was dutifully buried by the leftists and their sub-servient media when the patron-lady of the podium was in danger of ‘cancellation’ in February.

A tweet was uncovered from August 2020 in which the then-CNN contributor referred to Senator Lindsay Graham (R-SC) as “Lady G”. The tweet drew Psaki harsh criticism as being “Homophobia and intolerance” and promptly disappeared off of the scope.

Columnist Adriana Cohen wrote for Standard.net that “Biden must fire Psaki” seeming to presage the announcement by about two months.

“Here’s what should happen: Psaki should be held to the same standards as all Americans. Twitter and other social media should shut her accounts like they do to others, and President Joe Biden should issue a statement condemning her homophobic tweets while announcing her replacement. Or Biden’s press secretary should apologize to Lindsay Graham and be given a second chance in the court of public opinion — as should all Americans guilty of offensive speech. If the Biden administration truly seeks to unify the country, it cannot perpetuate this arbitrary system that punishes some for speech that’s repugnant and not others based on political affiliation.”

It looks like the Biden-Harris regime got the message. Newsmax reported on May 7th, that both front-runners to potentially replace Psaki are Lesbian Karine Jean-Pierre, the principal deputy press secretary, former regional political director in the Office of Political Affairs under Obama and chief of staff to Kamala Harris during her campaign, and Ned Price a gay man and current State Department spokesman.

The Biden-Harris regime should be cautious though, if news gets around that Psaki’s successor isn’t also a trans-person of color they’ll have to answer to their own bloodthirsty woke mob. 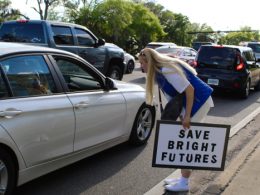