More and more states are starting to take matters into their own hands in the face of Big Tech censorship of conservatives.

The Georgia Senate passed SB 393, legislation that would restrict social networks platforms such as Twitter and Facebook from erasing posts and banning users who live or work in Georgia based entirely on their views.

The Georgia House is anticipated to vote on the new law soon. According to sources, GOP Gov. Brian Kemp will sign the bill into law if it clears the last hurdle.

If social networks users think that they’ve been unfairly censored or discriminated against based on their views, Georgia’s proposed Typical Provider Non-Discrimination Act would allow users to take legal action against those platforms.

To make sure that Georgia’s legislation isn’t merely a paper shield, it consists of enforcement systems that would require Big Tech businesses to issue a bi-annual report on a variety of metrics. For example, businesses would be required to report how frequently potentially prohibited content emerged on their sites and the number of times they banned or suspended users and material.

The Atlanta Journal-Constitution quoted state Sen. Greg Dolezal, a Republican who sponsored the bill, as stating: “Georgia is about to be the first state in the nation to empower users of social media platforms. By passing SB 393, we are ensuring Georgians are not unfairly targeted for their personal ideologies.”

In a tweet published earlier this month, Republican Senate leader Mike Dugan said, “Georgia is about to be the first state in the nation to empower users of social media platforms. By passing SB 393, we are ensuring Georgians are not unfairly targeted for their personal ideologies.”

What Dolezal and Dugan want to do in Georgia is a great start. The fight to preserve free speech online should first be done in the states. It is in the states where this precedent will be set, and this is where conservatives can attack Big Tech and win.

The Florida law is more particular than the Georgia legislation because it provides guidelines for when to fine tech companies when they move to deplatform politicians during election season. Both the proposed Georgia law and the Florida law provide social network users the power to sue Huge Tech businesses if overzealous censors squash conservatives’ free speech rights.

But where the Georgia costs really shines would be in mandating transparency reports. Huge Tech businesses cannot run behind veils of secrecy and use copouts when asked to justify sweeping bans of conservative people. By compelling businesses to tape-record and report their censorship, users of social media would gain an unassailable paper trail showing conclusively that Big Tech actively censors voices from the right.

Too often, Huge Tech business hide behind their algorithms to justify censorship. Yet developers and other personnel determine the design and implementation of those algorithms. Users have a right to details on this primary active ingredient of the product they use. …

Openness reports should include comprehensive effect evaluations of how these companies’ algorithms operate and impact users, consisting of information on the effect of any advertisement hoc changes within reporting periods.

The Daily Signal is the multimedia wire service of The Heritage Foundation.

Georgia should be a fascinating test case in the fight againt the maddening suppression of info by Big Tech. The “laboratories of democracy” theory of state and federal power will be a strong future case study here.

Americans appropriately worried about the censorious nature of tech corporations will watch with bated breath how the Georgia legislation, if passed, serves to safeguard speech online. If it works, other states can utilize it as a model for their own battles versus Big Tech.

Platforms such as Twitter and Facebook will continue to attempt to silence conservative thought through concerted censorship. But fortunately, Georgia’s bill and others like it will give consumers and users the tools to combat back.

Biden Team Poised to Throw Us Into War This Week

The Biden/Harris regime has taken the United States back to the brink of war, this time in Southeast…
byStaff Writer
No comments 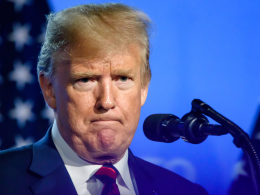 Another state is bailing on Donald Trump. The Iowa caucus has had a big swing in who it…
byStaff Editor
No comments

President Donald Trump’s campaign has filed yet another campaign lawsuit in the contested battleground state of Wisconsin. Trump…
byAmalia White
One comment