Co-Chair of Turning Point Action and Founder of Students for Trump and RFAngle Host Ryan Fournier has released footage leaked by President Trump’s Assistant that is driving liberals insane and causing an online uproar and meltdown today. The video which is hosted on Rumble shows the President met with a thronging crowd and thunderous applaus as he walked back to his vehicle last week escorted by Secret Service agents. The President didn’t shrug behind his security however, he went straight to the crowd directly, greeting them warmly and pausing for pictures with waves, kind words and fist bumps.

Think The Video Will Cause A Meltdown? Check The Polls…

As Fournier tweeted, the American people by and large, still seem to love President Trump, and that just sends the lefties spiraling down into meltdown-ville at high-speed. However, there seems to be some legitimacy to this understanding, especially given a recent report from thegazette.com who wrote “If he runs, former President Donald Trump is the odds-on favorite of Iowa Republicans to win the state’s first-in-the-nation presidential caucuses.”

According to the report, a Victory Insights poll of 650 Iowa Republicans found that 61% say they would support another Trump run in 2024. Not a single other potential candidate broke the 10% line.  Governor Ron DeSantis (FL), Former Vice President Mike Pence and Senator Ted Cruz (R-TX), who won the 2016 Iowa caucuses, run the top of the board, with Former UN Ambassador Nikki Haley, South Dakota Gov. Kristi Noem, former Secretary of State Mike Pompeo and even Sen. Mitt Romney are considered “low-tier” or unlikely candidates.

Victory Insights made sure to hedge their bets though saying, ‘Of course, there are several aspects of the Iowa caucuses that polls can simply not anticipate. After all, the caucus still is years away,” However, The President’s Save America PAC isn’t. They released a statement from Pollster John McLaughlin to drive the point home.

“President Trump is the strongest endorsement I have ever witnessed in politics. Polling continually shows that when President Trump endorses, it almost always clears the field and puts his America First candidate on the path to victory. That’s why everybody is coming to Mar-a-Lago for his support. Nationally, polling continually shows that 69% of all Republican primary voters want President Trump to run again in 2024—including 76% of Trump voters and 70% of Republicans. If President Trump runs again, Republican primary voters will support him 82% to 15%—including 89% among Trump voters and 83% among Republicans. John Bolton’s failed warmonger views are completely out of touch with today’s Republican Party and the majority of Americans. President Trump’s successful America First policies kept us safe. This is a big reason why Republicans want him to run again.”

Considered against CPAC straw polls which Trump also dominated, its fairly inescapable that President Trump, in spite of all that the mainstream media has thrown at him and in spite of rampant cancel-culture, is still extremely popular among his core constituents. This early into a term, that’s pretty bad. When you consider that Senator Warnock of Georgia will have to defend his seat in 2022 alongside much of the House of Representatives and the DNC could concievably lose control of the Congress, its downright terrifying for them. 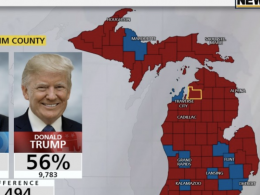 A 66 year old abused wife finally snapped, killing her husband. When police arrived, she told them that…
byAnastasia Boushee

On Thursday, the president of Kosovo made a substantial announcement that he resigned after he faces war crimes.…
byChristopher Dorsano