Newly appointed General Inquisitor Merrick Garland has the Ministry of Justice probing “a Democrat lobbying firm.” The problem is that it might spill over into the Hunter Biden tax evasion case. The Democrat lobbyists “worked with Ukrainian gas company Burisma while President Joe Biden’s son, Hunter Biden, served on Burisma’s board.” Things are getting tricky as the intrigue at the Palace heats up.

Agents with the Federal Bureau of Instigation were forced to put a Democrat lobbying firm under the microscope, even though they didn’t want to. They warned everyone it might open a can of worms, and it did.

Palace officials desperate to pin something on Rudy Giuliani stumbled on potential nastiness and started to investigate Blue Star Strategies. Then they learned the trail of breadcrumbs led straight to Hunter Biden and freaked out.

Hunter Biden was making fat stacks warming a chair on the board of directors for a gas company in Ukraine. Most believe he only had the job because of the connection to his dad. With the DOJ under heat to do something about the rampant abuse of “covert” foreign lobbying operations they have been turning over all the rocks.

The plan is to focus on “Republicans linked to former President Donald Trump, including an active probe of his personal lawyer Rudy Giuliani.” Accidentally, they opened a file on Blue Star. That’s one firm they were supposed to leave alone. It creates “legal jeopardy” for lawyers and operatives “aligned with the Democratic Party.”

The Delaware branch of the U.S. Attorney’s Office already has an investigation moving full speed ahead into “Hunter Biden’s financial matters.” It just evolved into merging with “the criminal investigation” into the one involving the Blue Star Strategies firm.

Imperial Leader Joe Biden wasn’t happy to learn that “A federal grand jury appears to have already been convened in the case.” Kamala Harris is starting to think she might not need to leave for Central America after all.

According to the report, one “focus of the investigation is whether the firm failed to comply with disclosure requirements under the Foreign Agents Registration Act.” That’s a law which “requires Americans to disclose lobbying and public affairs work for foreign officials and political parties.” Hunter didn’t do that. The company is rushing to distance themselves from the Biden cartel.

“There is no indication that Hunter Biden is a target of the investigation into Blue Star,” Co-founder Karen Tramontano testified. She insists that “Hunter Biden did not direct any of the firm’s work for Burisma.” He was so cracked out he didn’t do much except drool. His only function was to set up meetings between Burisma bigwigs and Joe Biden. He had problems doing that.

Then, there’s the gun. When he was sleeping with his brother’s widow, and her sister on the side behind her back, she threw his gun in a dumpster. When he found out about it he freaked out and sent her back to retrieve it. By then it was gone.

Eventually the weapon was recovered but that’s not the part that he’s in trouble over. He wasn’t supposed to have it in the first place. Long before the Ukrainians and the Lobbying firm knew they had a problem, Hunter lied on a federal form.

In order to get the mislaid weapon, Hunter had to pass a background check which requires ATF Form 4473. Lying on that form “can carry a 10-year prison sentence with a $250,000 fine.” Hunter lied. After certifying on that form that he wasn’t “addicted to any substances” he went straight to his stash of cocaine.

He admitted in his official biography that “at approximately the same time he obtained the firearm, he was addicted to drugs.” That’s not good for Joe. He doesn’t have the firm grip on the Palace he thought he had and Kamala may get her chance. Especially if she keeps secretly feeding intel to the FBI. 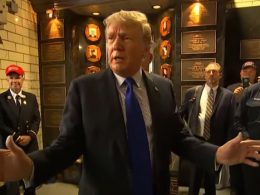 New York, NY- With news breaking from The Gateway Pundit to MadworldNews to thedonald.win the left seem to…
byMatthew Holloway

Too Much to Bear: Vaccination, Corruption, and Separation…The End of Bill and Melinda Gates