DC Mayor Shows How Much She Hates Cubans

The recent decision by District of Columbia’s alleged Mayor Murial Bowser proves once and for all that we have two sets of laws these days. Ones for liberals and others against conservatives.

It’s perfectly protected free speech to splash “Black Lives Matter” along two full blocks of roadway near the White House. But the Spanish lingo version of “Free Cuba” in front of the Cuban embassy simply had to go.

That’s the “wrong kind of activism for Bowser,” Western Journal writes. Apparently nobody is allowed to protest “against the human rights abusers in Havana.” Communism is utopia, Democrats sigh. Why do they need freedom when their leaders give them everything? All that matters is when Mayor Bowser barks, city officials get scrubbing.

“Bowser ordered the pro-freedom slogan to be removed, and it didn’t take long before ‘Cuba Libre’ was a memory.” Too bad it wasn’t that easy to get the anarchists out of Lafayette Square park. That took teargas.

Mayor Bowser didn’t give her blessing to the slogan, which bears no resemblance whatsoever to the BLM mural, she insists. “The ‘Cuba Libre’ painting on the street was unauthorized,” official spokesunit Erica Cunningham relates.

So it was power washed away. Bowser was singing a different tune last year. She was “adamant that the Black Lives Matter mural was important in order to honor George Floyd after he died in Minneapolis police custody.” Anger against police is good but anger against communists is bad.

Someone left a message in front of #CubanEmbassy in #washingtonDC #CubaLibre #SOSCuba pic.twitter.com/We9v3xjfE6

A lot of anger

Last summer, Mayor Bowser declared that we “know what’s going on in our country. There is a lot of anger. There is a lot of distrust of police and the government. There are people who are craving to be heard and to be seen and to have their humanity recognized.”

It’s okay to crush the proletariat into the dirt over in Cuba though. Havana is a whole 228 miles from Miami and there’s an ocean in between. Black folks need Target stores to loot here at home. The two are completely incompatible.

“We had the opportunity to send that message loud and clear on a very important street in our city,” Mayor Browser reminded.

There’s no way she’s going to let anti-socialist Cuban refugees go painting things about freedom on any of those streets and dilute the progressive message. If you don’t like Cuba or communism then “go away.”

Antifa® brand anarchy practically began with Karl Marx. Cubans have been enjoying all the benefits of Bernie Sanders style socialism for decades like “abuse, starvation and killings.” Mayor Bowser doesn’t want you to know about that.

You could see the BLM “mural” from space but nothing can get in the way of the Democrat scheme to allow Black folks to gather their own reparations by looting local merchants and taking out their frustrations by burning police stations. “Share the wealth,” they say. Soon you’ll be eating your pets. Zoo security is already getting tight.

Another of those cars with a mind of it’s own had an encounter with BLM. They instantly applied…
byMark Megahan
No comments 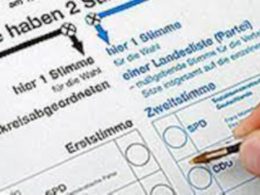 Wide-Scale Irregularities Across The Election [Evidence]

As the results of the German Election have become public, one thing is clear: just as it was…
byMatthew Holloway
No comments