A century old tombstone is going viral for its chilling warning about the Democrat Party. The grave belongs to a Civil War veteran who chose a very interesting epitaph to leave for future generations to read.

Nathaniel Grigsby, a man from Indiana who passed away at the age of 78 on April 16, 1890, served in the Civil War as a cavalry officer.

When he died, he decided to leave a warning on his tombstone against the evils of the Democrat Party.

“Through this inscription, I wish to enter my dying protest against what is called the Democratic party.

I have watched it closely since the days of Jackson and know that all the misfortunes of our nation has come to it through this so-called party.

Therefore, beware of this party of treason.”

Grigsby was born in 1811, and went to school in Indiana with who he describes as his ‘dear friend’ Abraham Lincoln, before the former president moved to Illinois.

Numerous sources have reported that Grigsby visited the White House at least once in his life, and even wrote to Lincoln in 1860 and received an appointment as Republican Precinct Committeeman.

“He invited him to his inauguration, and Lincoln gave him a cane,” said Grigsby’s great-great-granddaughter Kathy Dick, who added: “Lincoln warned him not to get into trouble over politics.”

Grigsby and several of his sons enlisted in the Civil War and fought in Company G of the 10th Indian Cavalry, where Grigsby earned the rank of second lieutenant. He survived the war and went on to be a farmer.

His final request before passing away was to ask for the warning to be chiseled into his tombstone. The New York Times reported on the warning in an article on May 15, 1898, stating that he had stipulated in his will that the message be put on his tombstone, or his family would not inherit his property.

The family made sure to do so, but added a disclaimer at the bottom which read: “Put on in fulfillment of promise to Deceased.”

It’s safe to say that Nathaniel Grigsby was not a fan of the Democrats.

On June 23rd, FBI agents stormed three churches throughout the South, all of which lie near military installations…
byStaff Writer
No comments 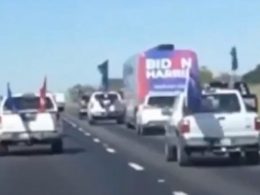 WaPo, Hot Air: Maybe Biden Should Clock In On Ukraine?

When a Democrat president loses the Washington Post as thoroughly as the publication’s front page implies, you’ve truly…
byStaff Writer
No comments