Reports are coming in of at least 100 dead or wounded as a Mosque exploded in northern Afghanistan on Friday. This wasn’t the mosque where the Taliban or ISIS members worship. Today’s kinder, gentler, Taliban expressed regret over the murder of minority “Shiite” Muslims while they peacefully prayed in church Friday.

Church full of dead and wounded

The only one of the hard-line theocracy running Kabul who would be caught dead inside a Shiite mosque was the one who got to collect his 72 virgins for pulling the ripcord. The Shiites were praying for liberty from their oppressors so the Taliban decided to grant their request and send them to paradise. The blast occurred in Kunduz, which is the capital of Kunduz province.

It’s also where the minority Shiites live. Ethnic Hazaras, “who are mostly minority Shiite Muslims, make up about 6% of Kunduz’s population of nearly 1 million people.” It’s also home to a “large ethnic Uzbek population that has been targeted for recruitment by the IS, which is closely aligned with the Islamic Movement of Uzbekistan.” That makes them a threat to Russia as well.

Nobody is bothering to claim responsibility for the bombing but “militants from the Islamic State group have a long history of attacking Afghanistan’s Shiite Muslim minority.” Today they were in the majority.

According to the deputy police chief for Kunduz province, regarding the figure of 100 dead or wounded, “the “majority of them have been killed.” The attack, he speculates, “may have been carried out by a suicide bomber who mingled among the worshipers.”

The Police Chief, Dost Mohammad Obaida, went on to tell the Shiites under his watch that they have no need to fear because he’s here to protect them.

“I assure our Shiite brothers that the Taliban are prepared to ensure their safety.” He also promises “an investigation” is already underway. The dead worshipers will be happy to hear it.

If confirmed, Faux News notes, the “dozens” already reported dead would be the highest death toll “since U.S. and NATO forces left Afghanistan at the end of August and the Taliban took control of the country.”

Now that they kicked America right out of their sand box they started playing rough. ISIS-K been suspected of “a series of deadly IS attacks, including shooting ambushes” as well as another explosion “at a mosque in the capital of Kabul.”

Friday’s blast went off like clockwork “during the weekly Friday prayer service at the Gozar-e-Sayed Abad Mosque.” Everybody knows that the “Friday noon prayer is the highlight of the Muslim religious week, and mosques are typically crowded.”

That’s how so many Shiites ended up dead from one Taliban terrorist. Ali Reza relates that “he was praying at the time of the explosion” and also reported “seeing many casualties.”

Photos and video beamed out “from the scene showed rescuers carrying a body wrapped in a blanket from the mosque to an ambulance. The stairs at the entrance of the mosque were covered in blood.”

They couldn’t tell how many were dead until they got everyone evacuated. What they do know is “a “large number” of worshipers were killed and wounded.” chief Taliban spokesman Zabihullah Mujahid claims “Taliban special forces had arrived to the scene and were investigating the incident.”

A police officer is attempting to hold a Democrat lawmaker accountable for her actions. Lt. G.D. Langford arrested…
byAnastasia Boushee 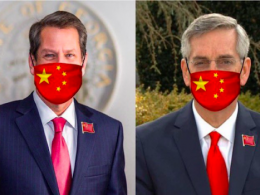