During a hearing of the Georgia State Senate Judicial Subcommittee Jovan Hutton Pulitzer, a technology investor and expert who was instrumental in early QR code development gave devastating testimony that a team working for him had successfully hacked Dominion voting systems at a polling location in Fulton county.

“At this very moment, at a polling location in the county, not only do we now have access through the devices, to the poll-pad, the system. But we are in. And it’s not supposed to have WIFI, and that’s not supposed to be able to happen. So we’ve documented it now, its communicating two-ways, in real-time. Meaning it’s receiving data and sending data. Should never happen, shouldn’t be WIFI, we’ve now documented it in real time so we can suck down the data. But that’s going on right there where everybody’s voting.”

According to OANN, “Pulitzer went on to say when the devices are connected to the internet, people can easily siphon and modify data, including votes in real time as it comes into the system.”

This development serves as more confirmation of the serious problems that the election has revealed in Georgia. This also is not the first unauthorized penetration of the Georgia voting systems on record.

The ‘Devastating’ Problems in Georgia

Between Democrats outright telling their supporters to cheat the system, and hand-recounts producing “false results” the prospects for the upcoming special election look bleak. The special election for two US Senate seats is already corrupt.

Democratic Candidate Jon Ossoff, definitively took money from China. The New York Post reports that Candidate Raphael Warnock “was taken away in handcuffs after interrupting a police interview with a camp counselor about possible instances of abuse.”

“Counselors tossed urine on a 12-year-old boy and forced him to sleep outside at the summer camp run by Rev. Raphael Warnock.”

All things considered, the prospects of a clean election in Georgia were foregone long before this testimony but it was absolutely “devastating”. The fact that election systems were on WIFI and somewhat easily penetrated cannot be ignored, testimony of this kind could potentially change the outcome of Congressional objections to the electoral college count expected January 6th.

Another of Joe Biden’s judicial nominees is failing after she flip-flopped over a false statement about police shootings.…
byStaff Editor
No comments

Faced with a mass uprising of Cubans, who are fed up with the sort of socialist utopia that…
byMark Megahan
No comments

The prime-time episodes of the January 6 Select Committee have served their purpose for the uninformed. The testimony…
byAnthony Smith
No comments 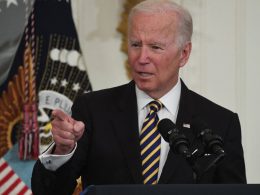 The Biden regime started a public, collaborative project last May to combat the dissemination of “health misinformation”  connected…
byStaff Editor
No comments