In a story lamenting the career of a man loyal to President Trump, The Washington Post seems to have inadvertantly spilled the beans on Attorney General William Barr.

Kashyap P. “Kash” Patel pushed for greater releases of information from the United States Intelligence Community to give the American people unprecidented transparency into the malicious sabotage of the Trump Presidency by the deep state.

He along with Director of National Intelligence Ratcliffed pushed for declassification of memos challenging the origins of the fraudulent Russia investigation.

“I think there were people within the IC [Intelligence Community], at the heads of certain intelligence agencies, who did not want their tradecraft called out, even though it was during a former administration, because it doesn’t look good on the agency itself,” Patel said in the RealClearInvestigations interview.

And now we know who had the final word and caused Patel, Ratcliffe and even President Trump to back off from costly internal legal battle: Attorney General William Barr.

“(Gen. Paul )Nakasone (head of Cyber Command and the NSA) strongly dissented, and (Defense Secretary Mark) Esper backed him up in an October letter to Ratcliffe “urging that the information not be released due to the harm it would do to national security, including specific harm to the military,” a senior defense official said. Haspel, too, strongly opposed release of the information. Their argument for protecting sensitive information was finally supported by Attorney General William P. Barr, and Trump backed away, a source close to the events said.”

As the Gateway Pundit reported back in December, Bill Barr claimed “that he had not seen evidence of widespread voter fraud that would change the outcome of the 2020 election.”

This new context that AG Barr was fighting to preserve the deep state as early as 2018-19 against Trump loyalists like Patel and Ratcliffe paints Barr’s decision in a whole new light.

His dereliction of duty and betrayal of the President and the American people wasn’t at all a new trick. He’d been doing it behind the scenes for years. In a silent battle taking place in the darkest corridors of the Pentagon, a shadow war of which we the public at large, only got to see the final act.

…and Now We Know Why Nothing Was Done

A video has resurfaced of an operative discussing working with the ACLU, a left-wing activist group, on issues…
byAnastasia Boushee 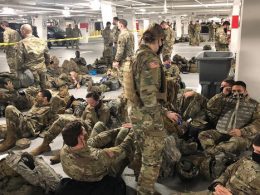 Democrats STAB Military in the Back, President Trump Shows How Patriotic He is

In one of the most rapid national disgraces ever seen in a Presidency now two days old, Democrats…
byMatthew Holloway