The Democrat’s desperate impeachment attempt on former President Donald Trump will not end in a conviction and is “dead on arrival.” Only five traitors on the red side of the aisle are willing to go through with it. A dozen Democrats in disguise are still lurking in the Deep State shadows. They promised to go along with the New World Order plan but didn’t have the guts to go through with it after they realized what their constituents would have to say the next time they returned home.

Democrats were successful at blocking the attempt by Libertarian Senator Rand Paul to get the latest liberal circus side show declared unconstitutional.

Sen. @RandPaul: "This impeachment is nothing more than a partisan exercise designed to further divide the country. Democrats claim to want to unify the country, but impeaching a former president, a private citizen, is the antithesis of unity." pic.twitter.com/W8SHXO2URn

Impeachment can only be brought against a president and Donald Trump is a citizen. They will still have the show, even though they know it’s all a waste of taxpayer money.

Democrats are hell bent on impeachment for two sinister reasons. They’re determined to block Donald Trump from ever setting foot in the White House again. They need a conviction to keep him from running again in 2024.

Progressives are totally terrified that he might be able to do it. The second reason is to make it easier for them to eliminate conservative opinions once and for all. The unity they call for is a demand for submission.

Mitch McConnell was all set to throw Trump under the impeachment bus in order to, as Western Journal notes, “make chasing pro-Trump elements out of the GOP easier.”

Pocahontas Warren fanned the flames with the quote, she couldn’t “imagine how Republican opposition to insurrection would fade over the space of a couple of weeks.” It did.

They lost, but that’s okay

On Tuesday, a coalition of constitution supporting conservatives made it crystal clear that “Trump won’t be getting convicted.”

A total of 45 republicans joined Rand Paul of Kentucky to vote “against proceeding with the impeachment trial on the grounds that it was unconstitutional to impeach a former president.” They lost the vote 55-45 but that’s not the point.

The Democrats will get to have their precious trial but with only 5 traitors to stab Trump in the back, “conviction is almost certainly impossible.” As Senator Paul explained, “If more than 34 Republicans vote against the constitutionality of the proceeding, the whole thing’s dead on arrival.”

He needed 34 and got 45. Democrats can forget all about impeachment and should, but won’t. “Democrats probably should rest their case and present no case at all,” he asserts.

The Senate just voted on my constitutional point of order.

45 Senators agreed that this sham of a “trial” is unconstitutional.

That is more than will be needed to acquit and to eventually end this partisan impeachment process.

This “trial” is dead on arrival in the Senate.

Another big sign that this sham impeachment isn’t constitutional comes from the fact that Supreme Court Justice John Roberts declined to preside over the trial. “If we are about to try to impeach a president, where is the chief justice?” Senator Paul asked.

Five “Republican” RINO traitors who won’t see a moment’s peace on their next plane ride are: Susan Collins of Maine, Lisa Murkowski of Alaska, Mitt Romney of Utah, Ben Sasse of Nebraska and Pat Toomey of Pennsylvania. Mitt Romney should be used to that kind of treatment by now.

New information has revealed that 17,650 votes were switched from President Trump to Fmr. VP Joe Biden according…
byMatthew Holloway 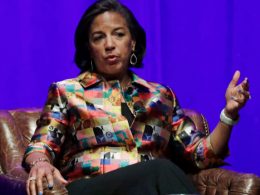 Susan Rice was almost Joe Biden’s running mate until Kamala Harris got that job. Now, she is in…
byMark Megahan

During his explosive CPAC speech, Donald Trump called out the RINOs who betrayed him and the voters, and…
byAnastasia Boushee