Donald Trump isn’t going anywhere. At a recent fundraiser, Trump made a surprise announcement that shocked the mainstream media.

Trump hasn’t gone into hiding like the left hoped he would. He has instead been appearing at several events recently, including a campaign event for former White House Press Secretary Sarah Huckabee Sanders, who is running for governor of Arkansas.

On March 14, Sanders shared a picture of herself with Trump on Twitter, with the caption: “Great weekend on the campaign trail featuring a surprise appearance at one of my events by President Trump!”

Great weekend on the campaign trail featuring a surprise appearance at one of my events by President Trump! pic.twitter.com/mn81i9AbsU

Trump endorsed Sanders’ run for governor soon after she announced her candidacy. In his endorsement, the former president called her a “warrior who will always fight for the people of Arkansas.”

“Sarah is strong on Borders, tough on Crime, and fully supports the Second Amendment and our great law enforcement officers. She loves our Military and Veterans – and her home state of Arkansas. Sarah will be a GREAT Governor, and she has my Complete and Total Endorsement,” Trump’s statement read​.

“Thank you President Trump for your endorsement and for always believing in me. As governor I will defend our freedom and lead with heart,” Sanders tweeted in response.

Thank you President Trump for your endorsement and for always believing in me. As governor I will defend our freedom and lead with heart pic.twitter.com/QFtyuNpSm1

During a fundraising event for Big Dog Ranch Rescue, Donald Trump made a surprise announcement. He hinted at a possible North Carolina Senate run by his daughter-in-law, Lara Trump.

“[What you’re] doing is so important and so great, and so important and I’m with you 100%, and you had many meetings in the White House and the Oval Office having to do with saving and helping dogs,” Trump said.

“I didn’t exactly prepare for this, but I was walking by, and I heard everybody screaming. I want to thank Lara, who has been so incredible — and I don’t know, are you running for the Senate? I hear she’s going to run for the Senate!” he added.

“President Trump visited the event and thanked those attending for their support in helping Big Dog Ranch Rescue save 47,000 dogs to date,” said Chase Scott, spokesman for Big Dog Ranch Rescue. “The crowd responded with a standing ovation for President Trump, Lara Trump and Laurie Simmons for the work they did to pass the first national anti-cruelty bill to protect animals.”

The Trump family isn’t hiding, they are continuing to fight for the American people — and their dogs. The Big Dog Ranch Rescue, along with the national anti-cruelty bill, are just part of the important work that the Trump family has done. The left wants Donald Trump to just fade back into private life and allow them to continue their plan to destroy this country, but he’s not going to do that. Now, the idea that another Trump family member may be headed to Washington, D.C. is driving the left crazy. 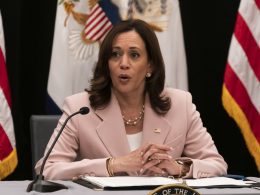 As Antifa violence continued in Portland, OR, and mere days before it broke out in Denver, CO outside…
byStaff Writer
No comments