They really didn’t mean it, right?

When the White House painted half this country as fascists, it was a mistake… had to be.

Actually, no, they meant every word of it, and Karine Jean-Pierre even doubled down on that right before Biden’s big speech in Philadelphia.

It would appear that the most give we will get from this administration is that it is only calling Trump supporters “semi” fascists.

Is that even possible?

Anyway, Biden made the comments earlier in the week and rumors were that he was going to do the same thing in Philadelphia.

When Jean-Pierre was called out about it, she quickly doubled down on Biden’s comments.

She stated, “We understand we hit a nerve. We get that.

“That’s what we’re talking about.

“We’re talking about MAGA office holders who have put forth an agenda that is extreme.”

That, of course, was a lie, as Biden made clear during his speech.

It gets worse, with Jean-Pierre stating, “When you are not with what majority of Americans are, then you know, that is extreme.

“That is an extreme way of thinking.”

Well, the majority of Americans believe that Joe Biden is failing, so are Biden supporters extreme?

Our Founders were not in the majority when they pushed back against the Crown and fought for our freedom… does that make them extreme?

We are under attack, my friends, that is what she was really trying to say.

Democratic policies are accountable for the nationwide rise in criminal activity and fatal ambushes of officers, a leading…
byStaff Editor
No comments 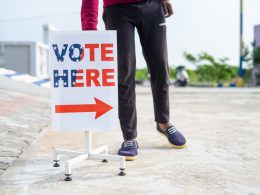 Last week, Georgia was looking pretty good. After the latest Quinnipiac University poll, that is no longer the…
byStaff Editor
No comments

The witch hunt is now heating up in a big partisan way, and only time will tell how…
byStaff Writer
No comments