Susana Almeida, a Mexican weathergirl, was doing her usual broadcast when viewers began to notice something strange down by her legs. The grey pants that she was wearing were just a bit too revealing, and after the weather reporter moved the remote control that she was holding over her crotch.

As soon as she did that, viewers began to notice a very obvious cameltoe. Unfortunately, Almeida appeared to have no idea what was going on.

The broadcast clip was posted on social media and YouTube, where it immediately went viral.

While some viewers had sympathy for Almeida, many speculated that she was completely aware of the potential wardrobe malfunction when she got ready for work.

“This was no accident… She got what she wanted, everyone to notice and talk about her. She knew she had a camel toe, and turned to show it off,” one viewer commented on a Facebook page.

“How about this! Its was NO MALFUNCTION She knew just what she was doing when she got dressed that day,” another added.

Other commenters defended the weathergirl, saying that she likely knew what was going on and didn’t care what people thought.

“All women have them. Nothing to be embarrassed about. She knew how she looked and prolly said damn good. I won’t flaunt it but I sure won’t hide it either. Rather have a camel foot instead of a bunch of junk down there that guys have to worry bout gettin hurt,” one viewer commented.

“What exactly is the malfunction. She is [doing] her job and some peeve zooms in on her and posts it? Grow up, she’s a beautiful Woman and whether she was aware of this, or even considered that this would be worthy of this, who cares?” another viewer added on AWM.

What could be more entertaining than listening to Joe Biden get roasted by the mainstream media? When he’s…
byStaff Writer
No comments

Yet another high ranking CNN employee, in this case, a producer of Jake Tapper’s ‘The Lead’ one Rick…
byMatthew Holloway
No comments 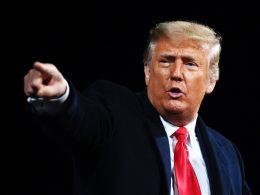 It’s a gross, crooked perversion of the Congressional process, it is dangerous and a slap in the face…
byMatthew Holloway
No comments