In a moment that highlights the degeneracy of today’s culture, a viral video shot by a customer shows four women attacking and robbing the cashier in a Popeyes drive thru in Lantana, Florida.

The Palm Beach County Sheriff’s Office reports that the fight began when one passenger started an argument with the cashier, which led to the passenger spitting at and assaulting the Popeyes employee.

In the 29-second video clip taken on March 16, the passenger then gets out of the vehicle, a silver Nissan Sentra, and starts attacking the employee through the drive thru window. Three other women then got out of the car to join the fight, with one of them reaching through the window to steal money from the register.

“PBSO Deputies responded to a strong armed robbery that just occurred to Popeye’s restaurant located in the 7000 block of Seacrest Blvd. Upon arrival deputies learned a silver Nissan Sentra occupied by four (4) females entered the drive thru. Upon reaching the window the female passenger/suspect got into a verbal argument with the employee/cashier, spat at and attacked the employee/cashier. Two other suspects got out of the vehicle and began attacking two other employees inside the restaurant. One of the female suspects reached into the window and grabbed money from the register. All four (4) female suspects entered the vehicle and fled the area,” department officials said in a statement.

“This investigation is still very active and ongoing,” a spokeswoman for the department said in an email.

According to the police, there have been no arrests yet, and the women have not yet been identified. The vehicle had Florida license plate number GVZP04. Anyone who can identify any of the four women from the video should contact Crime Stoppers of Palm Beach County at (800) 458-TIPS.

Our culture has become so corrupted and degraded that this video is what passes for entertainment. People are sharing it across social media laughing at the actions of these four women, instead of feeling ashamed that this is how far we have fallen. A “fight” and robbery in a fast-food drive thru in broad daylight has gone unsolved for several days, despite the fact that it was public, the license plate of the vehicle is visible, and the entire thing was caught on video. This video is a perfect depiction of the degeneracy promoted by today’s culture.

Thanks to Revolver News, we know Ray Epps was one of the key undercover fed “operators,” instrumental in…
byMark Megahan 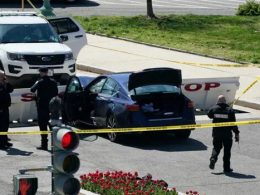