Susan Rice was almost Joe Biden’s running mate until Kamala Harris got that job. Now, she is in charge of setting all the official domestic policies for the Biden controlled Palace. All except the ones dealing with the economy. Her official title is Director of the United States Domestic Policy Council. She was guaranteed a high power position simply because she knows where all of the Barack Obama era bodies are buried. All that inside information isn’t bad for her extensive stock portfolio and her job title gives her special advantages Martha Stuart never dreamed could exist.

Federal ethics watchdogs are snarling and barking at Susan Rice. Not much is expected to come of it because we all know by now that none of our federal watchdogs have any teeth. The top palace policy maker has been ordered to dump “multi-million-dollar holdings in a fossil fuel giant.”

The secret to getting away with insider trading is a job in the administration. She just cashed in big-time because Biden backed the right pipeline.

Democrats, especially the radically greener ones, were stunned when Biden left a Trump administration policy in place.

All the powerful environmental activist groups were against it. Not only did Enbridge stock take off like a rocket, Rice was along for the ride. Biden granted approval to the pipeline Enbridge was building. It wasn’t Keystone.

Rice ended up hitting the “financial jackpot.” Her job as director of the policy council lets her “delay capital gains taxes on any windfall made off her sale of thousands of shares of Enbridge.” Ivan Boesky is jealous.

In all, she’s “been instructed by the U.S. Office of Government Ethics to divest stock worth nearly $32 million from more than three dozen companies and one index fund that she and her family own.” She’s heartbroken to have to sell all that stock with no penalty, just a huge profit.

Rice was stuck holding “approximately $2.7 million worth of shares of Enbridge, the Canadian oil and gas pipeline company constructing the controversial Line 3 pipeline through Indigenous lands in Minnesota.” She wasn’t about to let the Indians chase her away from her money.

She convinced Biden to revoke “the permit for the Keystone XL pipeline project” but at the same time, back the “Line 3 pipeline in court, allowing the tar sands oil pipeline project to move forward amid the intensifying climate crisis.” Now we know why.

“Enbridge shares are currently up about 13 percent since Biden took office, and earlier disclosures show Rice has previously raked in hundreds of thousands of dollars of dividend payments from the company.”

Liberal activists are outraged that selling out the green dream “also created a potentially lucrative tax shelter for herself and her family, thanks to a law allowing federal officials to defer capital gains levies when facing divestment orders from ethics regulators.”

Enbridge isn’t the only controversial stock the former National Security adviser has in her ledger. “The Office of Government Ethics is also ordering Rice and her family to sell off nearly $1.1 million worth of shares of Johnson & Johnson, the pharmaceutical giant and COVID-19 vaccine maker, housed in a family trust.”

According to Jeff Hauser, director of the Revolving Door Project, there “is no perfect way to handle divestitures, especially slow motion ones involving substantial conflicts of interest.” 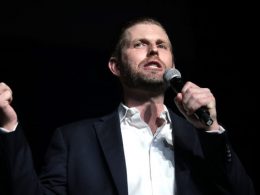 Dr. Anthony Fauci apparently just admitted that he’s been lying to the public in order to manipulate Americans…
byMark Megahan

Its Time We “SAY HER NAME” We Will Never Forget [VIDEO]