McCarthy DOES NOT HAVE THE VOTES

During the Republican vote for Speaker of the House nominee, there were more than 30 people that voted for Rep. Andy Biggs (R-AZ).

Now, I expect most of them to fall in line when it comes time to vote in the overall election.

The key phrase there is “most of them.”

He Could Be Short

When all is said and done, the GOP is expected to hold 222 seats, of which McCarthy needs 218 to back him to be the speaker.

There are already three House members committed to not backing McCarthy.

I cannot vote for Kevin McCarthy as House Speaker.

I do not believe he will ever get to 218 votes, and I refuse to assist him in his effort to get those votes.https://t.co/lyImFCOHgI

Rep. Matt Rosendale (R-MT) has also signaled that he would vote against McCarthy…

He wants to maintain the status quo, which consolidates power into his hands and a small group of individuals he personally selects. We need a leader who can stand up to a Democrat-controlled Senate and President Biden, and unfortunately, that isn’t Kevin McCarthy.

That leaves the number at 218, which means if there is one more dissenter, McCarthy will not win the election.

The only way out of this is for McCarthy to cut a deal with Democrats to secure the votes.

He may risk it on the first vote, but he wants that gavel, and above all else, he will do whatever it takes to get it.

So, just keep that in mind if you see Democrats come across the aisle and support McCarthy.

If that happens, a backroom deal has been struck and I can guarantee you that deal will not have conservative interests at heart. 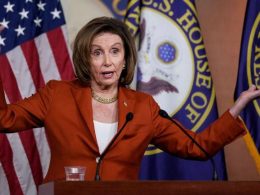