On Thursday, John Earle Sullivan, a known left-wing “agitator” from Utah, was charged as one of the “barbarians” who stormed the Capitol Building on the sixth of January as part of the “false-flag” insurgency which is being used to discredit every single conservative in America. Welcome to the post-constitutional era of global socialism. Sullivan isn’t just a leader of the left, he’s “founder” of “Insurgence USA.”

Sullivan reportedly stands accused of entering a restricted building or grounds, civil disorders, and violent entry or disorderly conduct. The media is going frantic trying to figure out how to cover a story which completely debunks the left-wing narrative. The media wants everyone to think that “Trump Supporters” were behind the Capitol Breach but that claim is “FALSE.”

John Sullivan in DC in December- post from Instagram. He’s behind in the Tooele County Jail in Utah. His first court appearance 1/15 Friday. pic.twitter.com/fH9jxFmcJM

Sullivan is a leader of a liberal group planning violent “insurgence.” The MSM doesn’t like getting caught putting out fake news, so they ignore their crimes and keep doing it, while censoring the opinions of their opponents out of existence. A year from now, the conservatives themselves will probably have “disappeared.”

According to the Daily Caller News Foundation, Sullivan showed up on CNN after the incident, “claiming he witnessed the fatal shooting of protester Ashli Babbitt by a Capitol Police officer.” MSNBC had a little chat with him too.

The radical leader is awful popular on progressive networks for an alleged “Trump Supporter.” The networks must have known his history before they handed him a microphone. Otherwise he might have said something uncomfortably conservative on MSM media, which cannot possibly be allowed.

As outlined by an affidavit of probable cause, Sullivan was quite vocal as the insurgent leader “apparently cheered on the breach and subsequent destruction.”

The document notes, “after the crowd broke through the last barricade, and as SULLIVAN and the others approach the Capitol Building, SULLIVAN can be heard in the video saying at various points: ‘There are so many people. Let’s go. This s— is ours! F— yeah,’ ‘We accomplished this s—. We did this together. F— yeah! We are all a part of this history,’ and ‘Let’s burn this s— down.'”

Many thousands of angry conservatives surrounded the Capitol Building that day but did it peacefully. They were there to defend the Constitution and the American way of life, along with the President who dares to act like a leader should, to stand up for the same things his constituents do.

"We gotta get this shit burned," he said inside the Capitol. pic.twitter.com/YgdwEOtJMk

Each and every one of them were shocked and saddened by what the radical children of darkness did to discredit the entire patriot cause. That’s the number one reason they’re convinced it was a total set up. Along with the fact that security was practically non-existent and totally unprepared for what was expected.

The big sound bite which will haunt Sullivan was his quip, “we gotta get this sh!t burned.” Contrary to what the media wants everyone to believe, the barbarians were most certainly NOT supporters of either Donald Trump or the Constitution.

Even Politifact, the official “fact-checking” watchdog which leans so far left that they’re about to fall over, admits Sullivan is the leader of Insurgence USA. The group, they grudgingly acknowledge is “an activist group against police brutality.” In other words, Black Lives Matter and Defund the Police. Neither of those causes are conservative.

“Sullivan has not been shy about his presence at the Capitol riot,” Politifact goes on to confess. “He filmed the events as they happened, and he was nearby when Capitol police fatally shot a woman inside the building.

He described the shooting during an interview with CNN’s Anderson Cooper that night.” He strolled into the building totally unchallenged, as if the mob were intentionally allowed in. The leader in charge of Capitol Security that day has already resigned in disgrace.

On Thursday, local news reporter Heidi Hatch started pointing out that Sullivan was no “Trump Supporter.” She spelled out for liberals who don’t want to believe the truth that Sullivan is totally “left-wing” and “expressly anti-Trump.”

As she writes, “John Sullivan in DC in December- post from Instagram. He’s behind in the Tooele County Jail in Utah. His first court appearance 1/15 Friday.” For “context” she included an Instagram video allegedly posted by Sullivan. The caption reads, “We got to rip that MF (motherf***er) out of office.” There were a few radical left hashtags included. Americans say “tell me he’s not a leftist leader.”

Speaking in the video, Sullivan is heard declaring, “we gotta f***ing rip Trump out of that office, right over there. F***ing pull him out that s***. We ain’t about wait ’till the next election. We about to go get that motherf***er.” According to the Department of Injustice, “Sullivan is scheduled to appear in court in Utah on Friday at 4 p.m.” 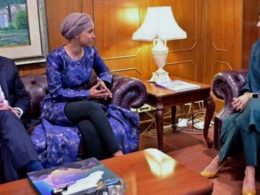 Why in the world do leftist Democrats like Rep. Ilhan Omar think that they can meddle with the…
byMatthew Holloway
No comments

In an extremely rare Bi-partisan act, Republicans in Georgia led the repeal of the state’s 1863 Jim Crow…
byMatthew Holloway
No comments