Jen Psaki, White House Press Secretary managed to land herself in the precision crosshairs of one of the best legal minds and conservative commentators in the business during an appearance on the ineptly named “Pod Save America” on January 25th. During the podcast, Psaki described herself watching a quad-screen display of news channels as is common in government offices. She explained: “So CNN — ‘Pentagon: As many as 8,500 U.S. troops on heightened alert’ — OK, true,” she noted approvingly. “Same on MSNBC … CNBC is doing their own thing about the market.” … adding laughingly“And then on Fox is Jeanine Pirro talking about ‘soft-on-crime consequences,’” making easily one of the biggest mistakes in her career. Judge Pirro made that vividly clear.

“I mean what does that even mean, right?” Psaki said scoffing at Pirro. “So there’s an alternate universe on some coverage,” she claimed, in spite of the toughest questions for the administration consistently coming from Fox.

“What’s scary about it is a lot of people watch that,” the Press Secretary added contemptuously, in utter disdain.

Judge Jeanine Pirro’s retribution was swift, brutal, and immediate and blasted across social media in an instant.

Jen Psaki mocks people discussing the “consequences” of “soft-on-crime” policies: “What does that even mean?” pic.twitter.com/C1KEnXVIQI

On the set of Fox’s ‘The Five’ Jesse Waters must’ve been able to smell the ozone from the smoldering Justice Pirro just across the table from him.

Judge Jeanine: Jen Psaki Locked Up in Her ‘Ivory Tower,’ She Has No Idea What Americans Really Care About pic.twitter.com/DqccZNx4bz

“Well, I’m talking about the consequences of the Democrat/liberal/progressive/leftist soft-on-crime, criminal-loving, victim-hating group that has made a decision that no bail, no jail, and that criminals should be privileged and that social justice and rogue prosecutors should not be a part of the criminal justice system,” Pirro intoned.

“Jen, are you so locked up in your ivory tower that you have no idea what Americans really care about and what they’re concerned about?” she asked her thinly veiled anger palpable.

Pirro continued, that what Americans are concerned about is the “killing of innocents who didn’t deserve it, they didn’t ask for it, they did nothing but get in the way of a murderer,” one who is only out on the streets due to the “progressive” bail reform policies when a “murderer and not God decides that they should die.” The hits only kept coming from there.

According to The Western Journal,

“Pirro went on to blast Psaki and her “ilk” for refusing to “recognize what you’ve done” as crime skyrockets.

She noted that as homicide spiked 44 percent in major American cities, a likely reference to NYC’s homicide data between 2019 and 2020, President Joe Biden “ignored the looting, the burning, the rioting, and he ignored the burning of a federal courthouse and police precincts” but that only now he’s expressed an interest in going to New York, where he plans to tour NYPD’s headquarters, as the New York Post reported.”

“Why didn’t he do that when they were defunding, demoralizing, and denigrating cops,” Pirro challenged her. “Why now? Could it be because this is an election year, a midterm year?”

“And why not increase funding when cops really needed it?” she continued. “You people don’t stand up for law and order, we do.”

The admonishment from the learned judicial veteran didn’t stop there either “think about one thing:” she began again. “FOX quadruples all the pals, all of those networks that you identified that were talking about important things that I wasn’t.”

“Here’s the bottom line,” Pirro alluded as she gathered steam for the proverbial kill. 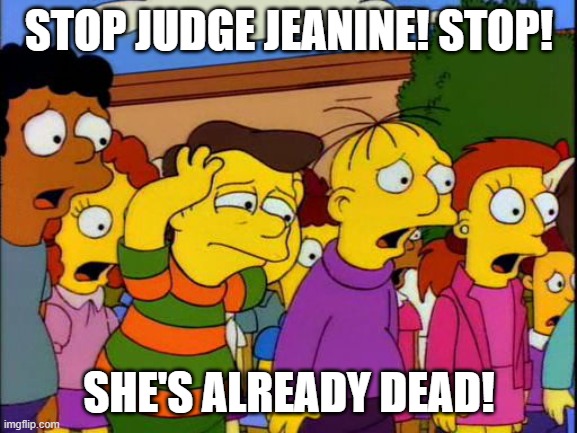 The worst thing that could have happened to Rep. Liz Cheney (R-WY) this close to an election has…
byAnthony Smith
No comments

For the majority of the last three weeks, Joe Biden has been out of the public eye. He…
byStaff Editor
No comments

Senator Ted Cruz (R-TX) is now taking a shot at being the next Nostradamus. Cruz is offering up…
byStaff Writer
No comments