Those of you that read my posts regularly know my disdain for Biden Chief of Staff Ron Klain.

First, he is a deep member of the swamp.

Second, he is a Biden loyalist.

Third, I believe he is probably one of the main shot callers in this administration.

Thankfully, his days finally appear to be numbered.

There have been rumors for months that Klain was considering leaving after the calendar flipped, rumors he denied.

With his leaving now apparently imminent, it brings another problem for Biden.

Klain has been involved with Biden since 1988, when he served as a speechwriter and adviser.

If there is anyone that knows what would have been in those boxes other than Biden himself, it would be Klain.

The fact that he is leaving right now when the sh** is hitting the fan, well, that does not bode well for Joe.

Believe me, the timing of Klain leaving is going to draw just as much attention as Biden having classified documents in his home.

Biden Has Taken Steps Towards The Unthinkable

The Biden regime has raised diplomatic relations with the Palestinian Authority, in what diplomats alert is the initial…
byStaff Editor
No comments

On Sunday, Kamala Harris interviewed Chuck Todd on “Meet the Press.” The line that got all the attention…
byStaff Editor
No comments 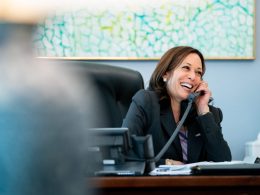 Kamala Must Think Americans Are Idiots, LISTEN to Her She Explain Things as If People Are Dumbed Down