A local Fox reporter out of Houston, Texas has been fired after she announced mid-broadcast that Fox has been “muzzling” her reporting, and told viewers that she had been secretly recording the “behind the scenes” goings on at the Fox corporation.

During a live broadcast on June 14, Ivory Hecker, a general assignment reporter and fill-in anchor for Fox 26, announced that she planned to release “behind the scenes” recordings with the help of Project Veritas, a non-profit undercover journalism group.

"I wanted to call you and let you know that you are suspended, effective immediately." #Fox26Whistleblower pic.twitter.com/OPVCBoXtq7

Soon after the suspension was announced, it was revealed that Hecker had been fired. Fox 26 confirmed the firing in a statement to several news outlets.

“FOX 26 adheres to the highest editorial standards of accuracy and impartiality,” a spokeswoman for the news station told the Washington Examiner. “This incident involves nothing more than a disgruntled former employee seeking publicity by promoting a false narrative produced through selective editing and misrepresentation.”

Project Veritas founder James O’Keefe released a statement on Telegram in response to Fox 26, stating that Hecker “actually wasn’t a former employee when she went live on air and sat down with Project Veritas, so [Fox 26] statement is factually incorrect.”

Hecker wasn’t bothered about being fired, and claimed that she had been wanting to leave her position for a while now. “I have been longing to part ways with this strange, slightly unhinged corporation since last August when I realized what they were,” she said, adding she has “zero interest in working for another corporation. They all toe the same line.”

Project Veritas published a video of the group’s founder, James O’Keefe, sitting down with Hecker for an interview about what she had seen while on the job. She also shared several video and audio clips of her superiors at the news station.

“Fox came at my throat for standing up against censorship,” she stated.

Hecker was concerned about several issues with Fox 26’s treatment of important news stories. She noted that the station had cracked down on reporting about certain topics, such as Bitcoin and the use of hydroxychloroquine to treat COVID.

In the interview, O’Keefe asked Hecker why she chose to come forward.

“What’s happening within Fox Corp is an operation of prioritizing corporate interests above the viewer’s interest and, therefore, operating in a deceptive way,” she responded.

Hecker also provided audio of Fox 26’s VP and News Director, Susan Schiller, telling her to “cease and desist” posting about Hydroxychloroquine on social media, soon after a press conference in which doctors promoted the drug as a treatment for COVID was censored by the mainstream media.

The former reporter also accused the news station of focusing heavily on race.

“From my experience, my newsroom kind of groups everyone into racial groups. A lot of our meetings are about, well, how does this play to black people?” Hecker said.

Another clip of Meier shows her stating: “I may say, yeah and Bitcoin for a poor African-American audience at 5, it’s probably not going to play. That’s a choice I’m making, an editorial choice.”

Not allowing a “poor” black audience the opportunity to hear about Bitcoin is doing them a disservice. The stock may be worth tens of thousands of dollars per share, but fractional shares can be bought. Many poor people in the country have become wealthy by buying cryptocurrency, but the mainstream media is in bed with the elites and therefore are trying desperately to discourage people from investing.

Hecker also discussed the tight leash that mainstream media corporations have on their employees. “There’s a narrative. Yes, it is unspoken. But if you accidentally step outside the narrative, if you don’t sense what that narrative is and go with it, there will be grave consequences for you,” she said.

One of the up-and-coming stars in the Democrat Party is unloading on Joe Biden again. Rep. Ro Khanna…
byAnthony Smith
No comments

In a contentious exchange following a White House event on January 24th, Joe Biden responded to a perfectly…
byStaff Writer
No comments 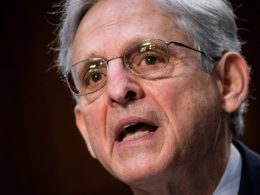 BREAKING: The Biggest SCOTUS Ruling Of Our Time

The Supreme Court has actually voted to overrule the landmark Roe v. Wade decision, according to a preliminary…
byStaff Writer
No comments