Donald Trump Just Got BOOED at His Own Rally

On Friday, Donald Trump headed to Arizona to hold the rally he was supposed to have last week.

That was delayed due to the passing of his ex-wife and mother to three of his children.

After seeing the video of the event, he may have wished he had put it off a bit longer.

It is no secret that Trump has struggled in Arizona as of late.

The majority of the crowd booed Crane, which took Trump by complete surprise.

He seemed taken aback in the moment, even asking the crowd if they still liked him…

Trump's latest Arizona endorsement didn't seem to go over that well at his rally pic.twitter.com/vpYISrCBjr

This is not a good sign in the primary elections for Trump, where he appears to be headed for a tough night.

Trump has endorsed several fringe candidates in the state, where, in some cases, he is even facing off against some of his top allies in the party.

Arizonans want nothing to do with election fraud claims regarding the 2020 election, and that seems to remain the sole focus of things for Trump during these rallies.

Point being, every candidate he has backed has the same mindset, so don’t be surprised to see Trump get clobbered next week in the primary race.

This is one of those states that I don’t expect to see him thrive again anytime soon.

Sarah Palin Announces She Isn’t Getting a Jab: Reveals What She’s Doing Instead

During a guest appearance on Fox News, former Alaska Governor Sarah Palin announced that she will not be…
byStaff Writer
No comments 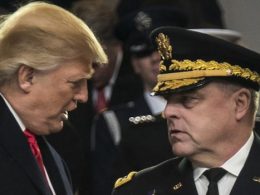 The world was rocked on September 14th as news broke of a new book, aptly named”Peril” being released…
byStaff Writer
No comments