President Donald Trump made a surprising announcement on Twitter about the election, and a lawsuit that may determine the fate of the country.

Early Wednesday morning, the president tweeted that his team will be joining the Texas election lawsuit at the Supreme Court.

“We will be INTERVENING in the Texas (plus many other states) case. This is the big one. Our Country needs a victory!” Trump tweeted.

We will be INTERVENING in the Texas (plus many other states) case. This is the big one. Our Country needs a victory!

A lawsuit was announced earlier this week by the Attorney General of Texas, Ken Paxton. The suit alleges that four key battleground states: Georgia, Michigan, Wisconsin, and Pennsylvania, exploited “the COVID-19 pandemic to justify ignoring federal and state election laws and unlawfully enacting last-minute changes, thus skewing the results of the 2020 General Election.”

Will Texas save our Republic? https://t.co/mq9nkHuf1c

“Trust in the integrity of our election processes is sacrosanct and binds our citizenry and the States in this Union together. Georgia, Michigan, Pennsylvania and Wisconsin destroyed that trust and compromised the security and integrity of the 2020 election. The states violated statutes enacted by their duly elected legislatures, thereby violating the Constitution,” the Texas Attorney General said in a statement about the lawsuit.

“By ignoring both state and federal law, these states have not only tainted the integrity of their own citizens’ vote, but of Texas and every other state that held lawful elections. Their failure to abide by the rule of law casts a dark shadow of doubt over the outcome of the entire election. We now ask that the Supreme Court step in to correct this egregious error,” Paxton continued.

President Trump’s announcement shows support for this lawsuit, and tells conservatives that the fight is not over yet. With the Trump legal team joining in, the Supreme Court will hopefully have no choice but to take up this case.

“The case everyone has been waiting for is the State’s case with Texas and numerous others joining,” President Trump said.

As usual, the left and the media are trying to downplay this lawsuit, or discredit it outright. The mainstream media have shown that they are completely invested in a Joe Biden presidency, and will push the Democrat narrative at all costs.

BLM Begins to Implode and Wither as Members Fight Over Money

And in the end, as they always do, the temporarily aligned “intersectional” forces of BLM, like Antifa: Eat…
byMatthew Holloway

Unfortunately, New York City is becoming known for its attacks on Jewish people. From lockdown measures being unfairly…
byAnastasia Boushee 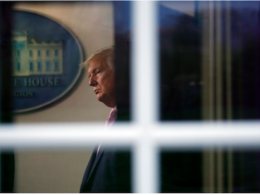