Former President Donald Trump made a huge announcement and he could not have been more specific. He will be running in 2024. “Yes, 100 percent.” He even has a running mate in mind. He also had a few observations about the FBI raid on Rudy Giuliani and Joe Biden’s Wednesday night speech.

Former President Donald Trump just made the big announcement that all of his deplorable supporters have been waiting for. He sat down with Maria Bartiromo at Faux Business for his take on Biden’s state of disunion speech. While he was there, they started chatting about the important issues.

When Bartiromo asked him if he would run again for president in 2024, Trump replied “yes, 100 percent, and the polls show that everyone wants me to do it.” He also agreed that Florida Governor Ron DeSantis is a possibility for Vice President. “Certainly, Ron would be considered. He’s a great guy.”

Wednesday was a big day in the political world. Another big announcement was the raid by the Federal Bureau of Instigation on the residence of former Trump attorney, and former New York City Mayor Rudy Giuliani. When the subject came up, Trump was furious. The whole display was “so unfair” and “such a double standard.”

The rats have been in charge of the cheese for far too long. Meanwhile, “Rudy is a patriot who loves this country.” Hunter Biden sold access to his dad to China, Russia, and the Ukraine but, as Trump points out, “did Hunter file? Did Biden file? Because they did a lot of work with other countries.”

Then there’s John Kerry. An announcement recently surfaced about him spying for the Ayatollah. The former Secretary of State allegedly “revealed to Iran that Israel had attacked its interests in Syria.”

As Trump suggests, “if there was ever a violation of The Logan Act, which they tried to pin on Gen Flynn who was totally innocent.” Trump’s still mad about the way Kerry sabotaged the Mid-East peace diplomacy by “making a deal with Iran.” Kerry told them to wait for a Democrat administration to make a “sweetheart deal.”

Give our country to China

Former President Trump also observed that in 2020, he won the election and “not Biden.” His Wisdom may be occupying the Palace but he didn’t get there legally. “The Arizona Senate right now is doing a forensic audit.” Trump is confidant that “it is going to reveal tremendous corruption and that is true of many other states.”

Any minute now you’ll hear a palace announcement that they sold us out to Beijing. Trump warns that Biden’s handlers will “give our country away to China.” Nobody has any incentive to get off the couch and go back to work “because of the stimulus money which is crushing small businesses.” 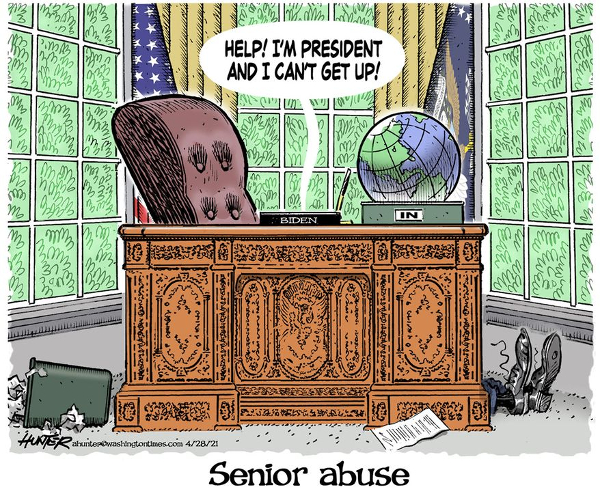 If the Democrats get their way on the election rigging bill, called H.R.1 then free and fair elections become a thing of the past. “H.R.1 would be catastrophic. This law that they’re trying to pass in Congress will override all of the states.” On every issue “including voter ID.”

That’s nonsense. It’s ironic, Trump declares, you “had to have your name, your picture” to get into the Capitol on Wednesday but they do not want ID for voting.” They eventually noticed that Trump’s big announcement wasn’t the only reason they were there.

Once they got to talking about Wednesday night security, it reminded the two conservatives that they were supposed to be there to talk about Biden’s speech. Trump noticed that Biden had carefully avoided making an announcement about plans to solve the border crisis.

In fact, he never mentioned it. Biden “did not discuss the border” and that “they are pouring into our country by the thousands.” That “could destroy our country if it keeps going and the longer it goes the harder it is to stop.”

On November 14th, RefuseFascism.org posted a vile and dangerous call to action to their cadre of Antifa and…
byStaff Writer
4 comments 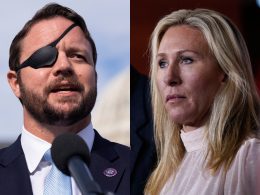 Unfortunately, it looks like Dan Crenshaw is now falling in line with the Dems, calling out people he…
byStaff Writer
No comments