Sooner or later, it always comes out.

Well, for Joe Biden, it is sooner.

Thanks to depositions given to the Florida Attorney General’s Office, the truth about the border is finally coming out.

Price revealed that many of the stats the Biden administration has been tossing out there could be fudged, especially in regard to the number of people that have been deported.

Here is that segment of his testimony…

Florida AG Moody stated, “Our deposition provides even more proof that the Biden administration is intentionally under-enforcing federal immigration law in a way that has never been seen.

“At every phase of the process, Biden is purposely failing to enforce the law and detain and remove inadmissible immigrants.

“Career ICE officials warned the administration that their reckless policies would drastically cut enforcement and still Biden continued to implement them—proving yet again, we only have Biden to blame for the border crisis and the surge in American deaths from Mexican fentanyl.”

That house of cards that Joe Biden lives in is starting to tumble. 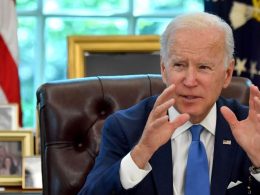 If Joe Biden does not look for a 2nd term, confidantes and City Hall insiders notified The New…
byStaff Writer
No comments

If you recall, after Roe v. Wade was overturned, the conservative Supreme Court justices were under siege. Even…
byAnthony Smith
No comments