“Over the last decade, Democrats have made a conscious decision to abandon the white, working class vote, choosing instead to assemble a coalition of black, Hispanic, LGBT, and liberal white, college-educated voters.

The facts are in:

Democrats are losing the support of the working class as they continue to push tax hikes, unconstitutional gun laws, and authoritarian COVID lockdowns. But, they are also losing support from minorities, especially because of their obvious animosity towards religion. A recent Pew survey shows that the number of black Americans (75%) and Hispanic Americans (59%) who say that religion is “very important” in their lives is significantly higher than white Americans (49%).

Patriot Post writes: “One can’t help but wonder how black and Hispanic voters, who say religion is very important in their lives, react to Democrat leaders who now call them intolerant, homophobic, judgmental bigots. One can’t help but wonder what they think as they watch the Democrat Party they overwhelmingly supported for decades openly declare war on the traditional family and religion. Actually, we know. Despite President Donald Trump being ceaselessly portrayed by Democrats as racist, bigoted, and anti-LGBT, he actually expanded his percentage of black, Hispanic, and even LGBT voters.”

Due to the growing intolerance within the Democrat Party, they have been losing support among key demographics, and gaining support from white, college educated, wealthy elites.

The Republican Party is beginning to appeal to all Americans who love their country and value freedom, while the Democrat Party has become so ideologically rigid that anyone who disagrees even slightly is cast out from the party. The wealthy elites support the Democrats, and push their radical agenda at every chance, while the working class has begun to support the Republicans in greater numbers. The GOP is the party of patriotic Americans who just want to be left alone, and the Democrats are the party of authoritarian elites.

Peeling Back the Lid on FBI’s Role In Colluding…

Sen. Chuck Grassley, R-Iowa, is implicating the FBI of having “a get-Trump-at-all-costs mindset.” Speaking on the Senate floor…
byStaff Writer
No comments 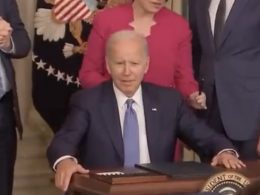 We only see a few outlets reporting on this, and it’s not surprising that the media has avoided…
byStaff Writer
No comments

US Labor Productivity Collapses at Most Rapid Rate Since WWII

The Bureau of Labor Statistics (BLS) released its quarterly “Productivity and Costs” report on May 5th, vouching for…
byStaff Writer
No comments