Fox News anchor Juan Williams has decided to take another shot at Donald Trump, and this time he went too far.

Of course, the mainstream media is enabling Williams’ delusional thinking, and running with the blatantly false narrative he is trying to push.

In a column in left-wing propaganda outlet The Hill, Fox News pundit Juan Williams attempted to argue that Donald Trump should not be allowed to run for president again in 2024 because of his so-called ‘coup attempt.’

In the column, Williams noted that he is convinced that Trump will be running again in 2024, and he wants the government to stop him.

The Fox News pundit claimed that Attorney General Merrick Garland should invoke Section 3 of the 14th Amendment, which bars anyone who “engaged in insurrection” against the U.S. from holding office.

According to the Fox News pundit, Garland has the “power to stop Trump from running again. It is time to use it.”

Of course, Williams and the rest of the Democrats suffering from Trump Derangement Syndrome (TDS) have yet to provide any evidence that Trump ever staged a “coup” or an “insurrection” or any other crime, despite their best efforts.

Regardless, they either fully believe their delusions, or they are so desperate to prevent Donald Trump from becoming president again that they are willing to lie through their teeth.

Foot Injuries, Dog Attacks, and Crackheads… This Administration is a Bad Circus Act

The Biden administration is starting to resemble a bad circus act, with dog attacks, a crackhead son, and…
byAnastasia Boushee 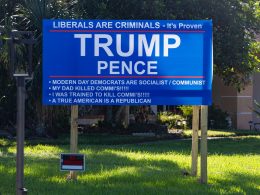 A Naples, Florida man put up an unofficial Donald Trump-Mike Pence presidential campaign sign in his yard, and…
byAnastasia Boushee