“Nobody is trying to take your Gun!!!” Are you as tired of hearing that from leftist apologists as I am? Democrat Congresswoman Sheila Jackson Lee’s latest bill in Congress should silence that lie. They are absolutely, unequivocally and brazenly going to make you GIVE THEM your guns or send you to prison. Rep. Jackson Lee has introduced H.R. 127 with the purpose  “to “provide for the licensing of firearm and ammunition possession and the registration of firearms, and to prohibit the possession of certain ammunition.”

Even someone with a basic understanding of the law can tell you that licensure is a precursor to confiscation, license by definition is “a permit from an authority to own or use something, do a particular thing, or carry on a trade.” Licensure of firearms is a direct contravention of the 2nd Amendment to the Constitution which upholds the right to keep and bear arms without infringement, licensure by definition is designed to infringe that right.

If this de facto Gun Confiscation law goes into effect, this is not an exaggeration: The Constitution of the United States will be NULL & VOID, the Federal Government will have no legal basis to govern and Civil War will be inevitable. Full. Stop.

This is NOT Gun Control, It is Confiscation.

In short the goal of this bill is firearm confiscation. The monetary barrier of entry is so high that it will disqualify tens of millions of Americans based on economics ALONE. Each license requires an $800 Fee! And “Firearm Insurance” which must be renewed annually, this is akin to forcing Americans who own firearms to shoulder a similar burden to registering and insuring ANOTHER CAR!

Your ex-wife or ex-husband or any member of your household will be able to deny you the right to own a gun either intentionally or unintentionally by accusing you of having a mental illness with zero evidence, or having one themselves in a psychologist’s opinion, or accusing you of being addicted to ‘a controlled substance’ (yes, marijuana counts) or ALCOHOL!

Between the economic and licensure requirements, a truly MASSIVE number of Americans will find themselves ineligible to own a firearm overnight and they will have just 90 days to turn-in or sell their weapons ( it will also become INCREDIBLY difficult to sell) or face incredibly harsh penalties: fines ranging from $5,000 to $150,000 (devastating for 90% of Americans) and 5-25 years IN PRISON.

Make no mistake if you’re a gun owner there is a very high chance you’ll be in violation of this law.

Forgive the Pun, Here are the HORRIFYING ‘Bullet-Points’ of HR 127

H.R. 127 is a lengthy bill which every single American should read, understand and contact their member of Congress immediately to categorically reject. The goal of this bill is transparent upon first read: you are not to be allowed to own a gun. It contains the following: 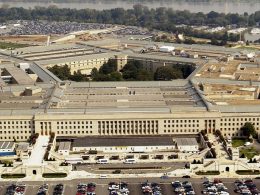 Details Emerge on What Happened at the Pentagon

When the August 3rd lockdown at the Pentagon was initially reported, no details were given about the shooting…
byAnastasia Boushee

After John Cena’s embarrassing apology to the Chinese Communist Party, he seemed to disappear from the headlines, until…
byAnastasia Boushee

Patient Arrives With WW2 Artillery Shell In His Rectum, Medics Scamper in Fear

The emergency room crew at U.K.’s Gloucestershire Royal Hospital was having a hard enough time coping with the…
byMark Megahan