Over in Myanmar, which used to be called Burma, police aren’t nearly as nice to peaceful protesters as they are here in America. They just shoot any troublemakers and that’s the end of it. Their military seized power away from Aung San Suu Kyi in a coup at the beginning of February. Wednesday turned out to be the second bloodiest day in the conflict, with at least 26 protesters murdered.

Witnesses including local citizens are describing how the military is murdering people for standing up to the junta. In the city of Yangon, which was formerly known as Rangoon, 13 people were reported killed.

Another 6 fatalities were listed in Monywa and two in Mandalay. Video footage shows “police brutally beating civilians in several areas.”

Since the start of the coup, over 50 residents have lost their lives to the military forces after violent and arbitrary crackdowns, the Assistance Association for Political Prisoners relates.

They note “many protesters and bystanders suffered injuries from live ammunition, tear gas, and beatings by security forces.”

Unlike the U.S. protests where Antifa and Black Lives Matter rioters come out at night, the violent confrontations in Myanmar happen in broad daylight.

Five of the demonstrators in Yangon, which is the nation’s largest city, “were hit by rubber bullets, and five others were arrested.” The military was relentless.

When the military forces hit the streets, they hit them hard. “Policemen broke the windows of some cars parked on roads and arrested not only protesters, but also those who were providing first-aid treatment to the wounded.”

As those on the scene report, “Police and soldiers set fire to tires across the road from the protest site and viciously beat four volunteers from an eldercare charity vehicle with blows to the head from their guns.”

As one activist explains, “The military and so-called police are making an enemy of the peaceful protesters, terrorizing and directing their guns towards people’s face, chest, head, back and abdomen.”

Armed soldiers “directed random shots towards the crowd” and they did it “in an intentional manner.”

Their police sound a lot like our Antifa protesters here at home. 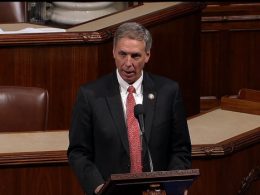 Congressman Tom Rice (R-SC) seemed like he was on the right track for quite some time, he was…
byMatthew Holloway
No comments