China just got the green light to infiltrate America’s core. Quietly and without fuss, a few days after his installation ceremony, Imperial Leader Joe Biden stroked his pen to revoke a Trump administration policy which forced American universities to disclose their connections with various “Confucius Institute” chapters.

“It is “not normal practice,” Seth Cropsey, insists, “and for good reason,” that an outside organization based in China can “choose professors in a program, within a university.”

The reason is “academic independence and freedom.” It’s really scary to add that the country behind the manipulation “is a strategic competitor to the United States,” the director of the Center for American Seapower at the Hudson Institute notes.

Rabidly progressive Axios went frantic when “in the final days of his presidency, Trump enacted a policy that would compel primary, secondary, and postsecondary institutions to disclose all contracts and transactions with the Confucius Institute.”

Under that restriction, schools that hid their involvement with China would “lose certification for the Student and Exchange Visitor Program.”

That would hit some flight schools in Phoenix, Arizona who train pilots for China while flying surveillance missions for the local office of the Federal Bureau of Instigation especially hard.

They admit that it’s “no secret” but don’t like it when the names of the front companies are used.

According to records from the Office of Information and Regulatory Affairs, Biden wiped the policy off the books on January 26. That was confirmed by a spokesunit for Immigration and Customs Enforcement. Cropsey explains that the move is certainly part of the New World Order’s way of “recalibrating on Sino-American relations.”

Still, he “hopes” the Imperial Leader isn’t simply trying to “placate China.” Americans who used to be allowed to call themselves conservatives have been expecting Biden to start sucking up to Beijing as soon as he burgled his way into the White House.

To Cropsey, the incoming regime seems to be attempting “overtures that make it sound as though the United States is unaware or uninterested in their military buildup, their aggression against neighbors, their militarization of the South China Sea, and their successful efforts to steal intellectual property.”

Back in August, former Secretary of State Mike Pompeo officially declared the various Confucius Institutes branches as a “foreign mission” of the People’s Republic.

To Pompeo, the whole purpose of the organization is “an entity advancing Beijing’s global propaganda and malign influence campaign on U.S. campuses and K-12 classrooms.” China is infiltrating America’s “common core.” The money comes straight from the CCP.

Propaganda aimed at American children is “funded by the PRC and part of the Chinese Communist Party’s global influence and propaganda apparatus.” As Campus Reform reported, “American universities accepted more than $24 million from Chinese Communist Party sources since 2015. Much of this funding was directed toward resources for schools’ Confucius Institute chapters.”

Unsurprisingly, liberals are once again trying to cancel someone for not following their mask mandates. Country singer Jason…
byStaff Writer
No comments

Vicente Zambada Niebla, the previous successor to the Sinaloa Cartel, will when once again have the capability to…
byStaff Writer
No comments 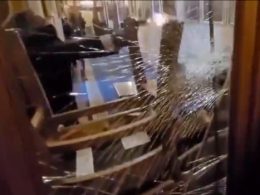 Why are They Hiding the Truth from This Patriots Family?

After an email from Carhartt CEO Mark Valade went viral on social media, conservatives began calling for a…
byStaff Writer
No comments